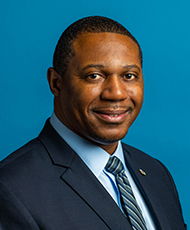 Charlie Hines became an IAM member in 2001 as a Fleet Service Agent for US Airways, joining Local Lodge 1725 in Charlotte. He was elected to Shop Steward in 2010 and served as Secretary-Treasurer of the Southern Piedmont Central Labor Council and Vice President of the Executive Board of the North Carolina AFL-CIO. Hines also served as Secretary-Treasurer for the North Carolina State Council of Machinists.  Hines has assisted with many organizing efforts, including the Southern Region National JELD-WEN Campaign and several airline campaigns. He holds an associate’s degree in business applied science and business administration and a certificate in business administration with a specialization in business management.