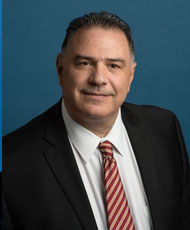 James Conigliaro is the General Vice President of the International Association of Machinists and Aerospace Workers (IAM) Eastern Territory.

Conigliaro first joined the IAM Executive Council on August 1, 2015, as General Vice President, working in partnership with the General Secretary-Treasurer to administer the IAM’s financial operations.

From his key role in organizing the 1996 “America Needs a Raise” rally on Wall Street, to his efforts to pass New York City’s Living Wage Law, Conigliaro has led the Machinists and other unions in playing a more prominent role in city, state, and federal elections. Through his leadership, District 15 won important gains on behalf of thousands of largely immigrant Black Car drivers in the New York City area who had been misclassified as independent contractors.

As a result of these efforts, former New York Governor George Pataki appointed Conigliaro to the Governor’s Task Force on Independent Contractors. He also served on the Board of the New York State Black Car Workers Compensation Fund and persuaded the Board to develop a black car driver safety program. In March 2009, Conigliaro was appointed a member of the New York Independent Livery Driver Benefit Fund Board of Directors.

Conigliaro has served four successive terms as a Machinists Union Delegate to the National AFL-CIO. He currently serves as Vice President of the New York State AFL-CIO, and as Treasurer of the Consortium for Workers Education (CWE), a private non-profit agency that provides a wide array of workforce preparation, industry specific training and employment services to over 70,000 New York City Workers annually including union members, New Americans, and dislocated workers. The CWE is the workforce development arm of the New York City Central Labor Council, AFL-CIO, whose affiliated unions represent over 1.2 million workers in the metropolitan region.

Conigliaro recently received the annual Peggy Browning Fund Award for his lifetime success and dedication to helping working families across the United States. Conigliaro was honored in 2013 as the “Man of the Year” by the Deborah Hospital Foundation and was a 2015 recipient of the Golden Lion Award from the Order Sons of Italy in America, by the New York State Grand Lodge Foundation. Conigliaro is also a prodigious fundraiser for the Guide Dogs of America having helped raise over $2.8 million for GDA over the last 15 years.