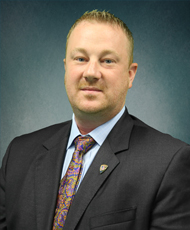 Joe Gruber was appointed to the position of Midwest Territory Education Representative on March 1, 2017.

Gruber, a nine-year IAM member, initiated into IAM Local 387 while working as a bonding mechanic at GKN Aerospace in Hazelwood, MO. There he specialized in the fabrication and assembly of parts for the F-18 Hornet and Super Hornet and the V-22 Osprey for the U.S. military.

Gruber has served as a delegate to the Missouri State Legislative Conference, where he chaired the Education Committee. He was a member of the New Machinist pilot program and was also a member of the IAM Disaster Relief Task Force, an IAM partnership with the Red Cross. Gruber has attended leadership classes at the William W. Winpisinger Center and has taken part as a volunteer in IAM organizing and political efforts. He was assigned as a task force member to the Midwest Territory in November 2016.