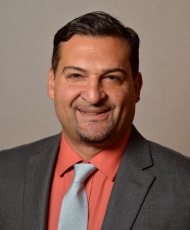 Larry Rother became Communications Representative for the Transportation Department in August 2016. His favorite part of my job is getting to know members from all over North America and hearing their personal and professional stories.

Rother was a 20-year member of the Communications Workers of America (CWA). His experience is rooted in both the labor movement and private-sector communications. Rother helped coordinate Verizon strike communications for CWA, leading to a successful outcome for thousands of union members. He also worked at the New York City global public relations firm Hill and Knowlton as a lead strategist, writer and researcher for global accounts.

When Rother is not at work, he enjoys spending time with his wife, three children and granddaughter. He is a big sports fan who roots for all New York teams.