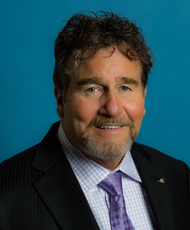 Mark Blondin joined the IAM in 1978 initiating into IAM Local 289 while working at an IAM-represented machine shop in Seattle, Washington.

Blondin was hired on at the Boeing Company in 1979, working as a Toolmaker at the Renton Plant. As an active member of IAM Local 751C, he held numerous Local Lodge positions through the years, including Shop Steward, Auditor, Trustee, Financial Secretary, Recording Secretary, Vice President, and District Council Delegate. He has always been a champion for workplace health and safety and served for many years on the Renton Site Safety Committee.

Blondin was assigned as an IAM Aerospace Coordinator in 2007, with the primary responsibility of negotiating all agreements between the IAM and Boeing throughout the United States and Canada. He served as Chief IAM negotiator for all IAM/Boeing contracts from 2002-2011 and until he joined the Executive Council in January 2012 as General Vice President of the Aerospace Territory.

On October 1, 2018, Blondin was reassigned to serve the IAM as General Vice President of the Aerospace Department.

Blondin also assists the community as a board member and fundraiser for the Guide Dogs of America, and as a volunteer for Victims Support Services, a non-profit advocacy group for victims of violent crimes.