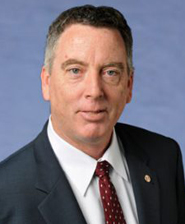 Brother McKinnon became active in the IAM soon after hiring into Solar Turbines in 1979. Matt served the members of Local 685 as Steward, Executive Board member, Trustee and Civil Rights Committee member. In 1985, McKinnon was elected a Business Representative for District 50. In 1988 McKinnon was assigned to one of the first classes in Political Education at then Placid Harbor, which led to his work in San Diego where he led a new effort in grassroots politics designed to raise the profile of working family issues. Over the years he has participated in well over 1000 Labor political education campaigns.

McKinnon served the California Conference of Machinists as statewide political coordinator for the 1990 elections, before being elected as Executive Secretary-Treasurer in 1994. He has also been the COPE Director of the San Diego-Imperial Counties Labor Council and the Health & Safety Director for the California Labor Federation.

In 1998, McKinnon was named co-political director for Gray Davis in his successful bid for the Governorship. From June of 1999 until June of 2004, McKinnon served on the California Air Resources Board. In 2003, Matt was appointed by Governor Davis as the first Deputy Secretary of Labor for Workforce and Economic Development.

Brother McKinnon was awarded the “Labor Visionary of 1998” by the California Labor Federation and “Labor Leader of the Year” awards from the Tri-Counties Labor Council and the Riverside-San Bernardino Labor Council.

In 2004, McKinnon joined the Western Territory staff as a Special Representative then as a Grand Lodge Representative with assignments in servicing, organizing, negotiating, labor disputes legislative & political action. In 2008, McKinnon joined the International President’s staff serving as the Director of Legislative & Political Action. In 2013, McKinnon returned to the Western Territory staff. His assignments have included Supervision and Training of Business Reps, Updating of Stewards Training, Legislative & Political Action, the NLRB desk and various other assignments.