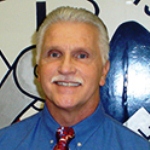 “Mike brings a wealth of knowledge and talent to the table, and we are excited to have him on our staff,” said Western Territory GVP Gary Allen. “We look forward to his contribution toward improving the lives of our members and their families.”

“Brother Goddard’s knowledge and expertise has been cultivated over a long and successful career as a representative of the members of IAM District 160,” said International President Tom Buffenbarger. “We are extremely proud to have him on staff.”

After serving four years in the Air Force as a Gas, Diesel, and multi-fuel engine mechanic, brother Goddard joined the IAM in 1977, when he went to work at the Naval Undersea Warfare Station (NUWC) in Keyport, Washington as a Machinist Helper; eventually becoming a Journeyman Machinist in 1982. In 1983 brother Goddard went into the Industrial Specialist Development Program and spent 4 years working in Washington, DC in Foreign military sales (Torpedo systems). After returning to NUWC, Keyport in 1987, Goddard became the Chief Steward for the White collar employees in the government sector. In 1998, Brother Goddard became a Business Representative for IAM District Lodge 160, and in 2009 he was appointed to the position of Assistant Directing Business Representative.