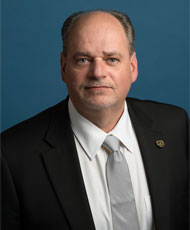 Wallace has also served on the Workforce Development Board of Middle Tennessee, an agency created by Federal Law to assist in addressing the employment needs of businesses, career development needs of workers, workforce development and youth education throughout a seven-county region. In 2000, Wallace was appointed to serve on the Executive Board of the Tennessee Labor Management Center and was also elected as a Delegate to the 2000 Democratic National Convention, representing the 7th Congressional District of Tennessee.

In 2013 Wallace was elected by the membership to serve as an IAM Delegate to the AFL-CIO National Convention. In 2015 he was appointed to Grand Lodge Staff serving as Special Representative and Grand Lodge Representative. In January 2016, he joined the IAM Executive Council in the position of Resident General Vice President.

Wallace currently serves as a Union Trustee on the IAM National Pension Fund and the IAM National 401(k) Plan. In these capacities, Wallace takes an active role in representing the interests of the IAM.