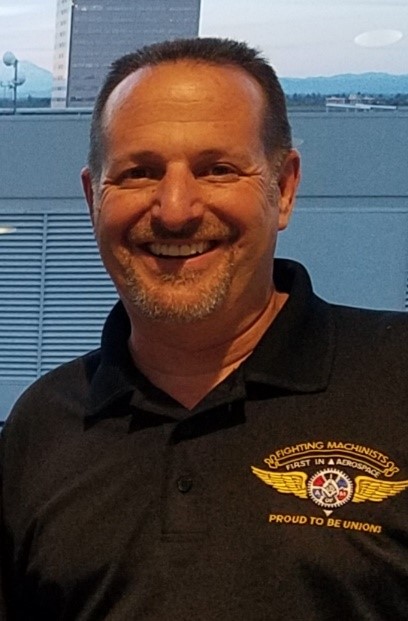 Brother Bob Simoni is a U S Navy Veteran who joined the IAM in 1990 with LL700 in Middletown, CT working for Pratt & Whitney jet engine test dept. In 2005 Bob moved to Las Vegas, NV,  where the opportunity to hire into Nellis AFB in 2009 working at the test cell testing Pratt & Whitney military Jet engines for CSC.

Once he started working for CSC he and his coworkers realized pay and benefits were not being paid correctly to the employees. The only way to fix the issues was to form a union. That’s when the IAMAW organizers reached out to the workers and established that the IAMAW was needed to fix the issues of the employees. The workers voted for the IAMAW and received a fair Collective Bargaining Agreement with CSC. Which solved worker pay & benefits issues.

Brother Simoni is a founding member of LLSC711 in Las Vegas, NV. During his time with LLSC711 Brother Bob held the position of local lodge President and also served his members as Chief Shop Steward at Nellis, AFB. Brother Bob also was Organizing Committee Chair, Legislative Committee Chair and a member of Negotiating Committee team for Nellis AFB.

Since 2009 Brother Simoni efforts to organize new members and grow union power for workers to have the ability for Collective Bargaining with their employer has not gone unnoticed. Now Brother Bob has accepted the opportunity to organize, educate and serve the membership of the Great Western Territory a position that gives him great pride in doing.