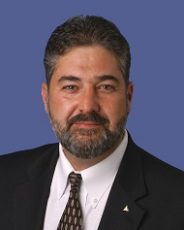 As the 14th International President of the International Association of Machinists and Aerospace Workers (IAM), Robert Martinez Jr. inherits a legacy that spans the history of the North American labor movement. Seasoned by his own 42-year union career, Martinez is committed to aggressively grow the union and protect the contracts and careers of nearly 600,000 active and retired IAM members.

Previous to his January 2016 installment as International President, Martinez had served since 2013 as IAM Headquarters General Vice President (GVP) with responsibility for the William W. Winpisinger Education and Technology Center and many IAM departments at Headquarters.

A U.S. Navy veteran, Martinez began his IAM career in 1980 as a member of Local 776A in Fort Worth, TX after being hired as an Aircraft Assembler at Lockheed Martin’s Fort Worth Division.

From 1980 to 1994, Martinez served in various positions with his local lodge before being appointed in 1995 as a staff member in the IAM Safety and Health Department. He also served as a Project Coordinator for the Re-Employment and Safety Training (IAM CREST) and for the Center for Administering Rehabilitation and Employment Services (IAM CARES).

In 1999, Martinez was assigned to serve as the Southern Territory Education Representative with responsibility for training and education for IAM members in 14 southern states. In April 2002, he was appointed as a Special Representative and served in that capacity until joining the Executive Council in 2003 as the General Vice President assigned to the Southern Territory.

In addition to serving on the IAM Executive Council, Martinez sits on the executive councils of the AFL-CIO, IndustriALL, Guide Dogs of America, the Labor Council for Latin American Advancement (LCLAA), the Alliance for Retired Americans, the AFL-CIO Metal Trades Council, the Elderly Housing Development and Operations Corporation (EHDOC), America’s Agenda and the Economic Policy Institute.

Martinez was honored with Guide Dogs of America’s highest honor, the Gift of Sight Award, and the LCLAA Cesar Chavez Award for his work on behalf of the Latino labor community.