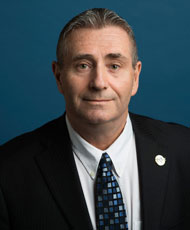 After more than 22 years as a full-time officer with the Machinists Union, Stan Pickthall joined the Executive as General Vice President of Canada on May 2016.

Pickthall, a journeyman steel fabricator, became a member of IAM Local Lodge 692 when he joined Finning International in 1984. An award-winning IAM newsletter editor for Northwest District Lodge 250 in Vancouver, he served in a variety of local lodge positions until being elected Business Representative of IAM District 250 in 1994. He was elected as Directing Business Representative of District 250 in 2005.

After serving two IAM Conventions as a member of the Law Committee, he was appointed as now retired-GVP Dave Ritchie’s Chief of Staff in August 2013.

Pickthall credited both the membership and the leaders of the IAM with providing him the opportunity to serve the union: “This is my life’s work, and I look forward to continuing that work with all of you at my side,” he said in his remarks to the Vancouver delegation. “I stand here before you because one day my senior steward – a mentor – asked me to get involved. I have had many mentors over the years, including our General Vice President, Dave Ritchie. I believe mentorship is key to furthering our movement.”

Known to pick up a guitar when the mood strikes him, Pickthall is also an avid cycling enthusiast when time permits. Married to Donna Marina, he has two daughters, Amanda and Vanessa, and two grandchildren, Evan and Lila.