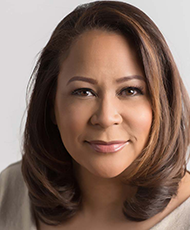 Tanya Hutchins joined the Machinists Union staff as a communications representative in late 2011 to shoot, edit and report news for videos on the union’s website, social media channels and what was then the IAM’s new app. Since then, she has covered organizing and collective bargaining at Boeing, the founding of the IAM Maine Lobstering Union and countless rallies involving IAM members.

In 2017, she started hosting Activate L!VE, the IAM’s weekly webcast. Hutchins loves shooting profile and introduction videos of members, especially those featured in “Member Monday” posts on Twitter, Instagram and Facebook. Hutchins feels every member can help educate the general public about the benefits of unions on and offline.

Hutchins is also a member of the Screen Actors Guild-American Federation of Television and Radio Artists (SAG-AFTRA), which she joined as a freelancer, hosting and acting in corporate training videos, commercials and films. She has more than 15 years’ experience as a news anchor and reporter. Hutchins is a proud graduate of Ithaca College in New York, about four hours north of where she grew up in White Plains.