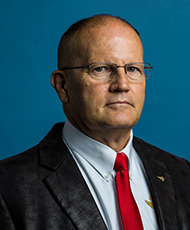 While at Fort Rucker, he was elected Shop Steward, serving in that capacity while obtaining a Modern Avionics Technology degree, a Modern Aviation Maintenance Technology degree and a Federal Aviation Airframe & Power Plant certificate. Blevins also enlisted in the Alabama National Guard and later graduated from the Federal U.S. Army Officer Candidate School, after being honorably discharged as a Senior Non-Commissioned Officer from the U.S. Army National Guard.