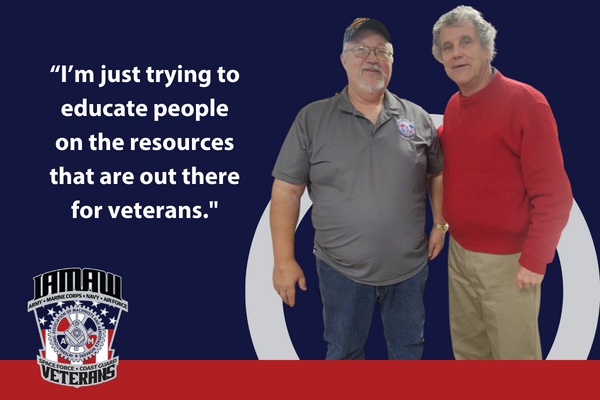 The roundtable discussed the newly-established PACT Act, the benefits it will provide for veterans, and how to make those benefits accessible to veterans as efficiently as possible.

Also sitting at the roundtable were the Ashland County Sheriff, representatives from Ashland County Veterans Services, officers from the VFW, and Mansfield Veterans Affairs Clinic workers.

About 20 veterans from the community observed the discussion, some of whom Confer served with in Desert Storm. Confer served in the United States Army (active, reserves, and National Guard) from 1976 to 1997, reaching the rank of Sergeant.

Confer has been an IAM member for a little over 18 years, and he serves as Vice President of the Ohio State Council of Machinists and President of Local 1297, in addition to his District Lodge 54 positions.

At union meetings, Confer distributes IAM Veterans Services information and gives reports on Veterans Committee activities and initiatives.“I’m just trying to educate people on the resources that are out there for veterans,” said Confer. “I plan on attending the IAM’s Veterans Services classes at W3 so that I can help other veterans and learn about all of the ways we can continue advocating for veterans.”

“Fred is known in the Ashland community as a resource for veterans,” said IAM District 54 President and Directing Business Representative T. Dean Wright Jr. “He was the first person to be invited to Senator Brown’s veterans roundtable, and they couldn’t have chosen anyone to better speak on policy intended to support veterans.”

“Brother Confer served our country in the Army and is continuing his service to the community as a political advocate for workers and veterans,” said IAM Eastern Territory General Vice President David Sullivan. “It is our responsibility as activists to do right by our military veterans, and fight for them. I’m thankful to members like Fred who use opportunities in the union, like the Ohio State Council of Machinists, to get involved with political matters and help our communities.”