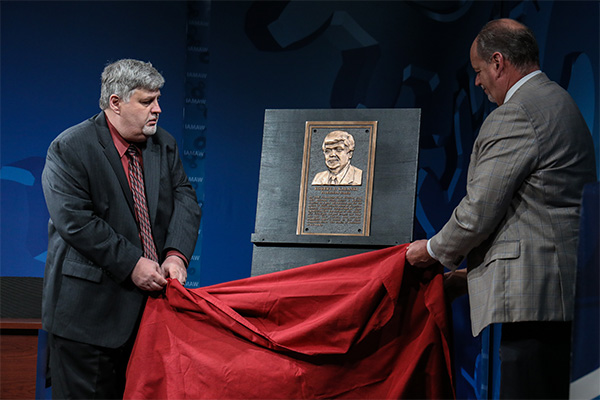 “Bob Kalaski ran this department from 1977 to 2000, a time of great changes in communications and technology,” said current Director of Communications Bob Wood. “When the union’s new headquarters building was built in 1992, he ensured this studio would become a valuable communications tool.”

Those who knew and worked with Kalaski remember him as a warm and loyal person who could have a powerful presence when necessary.

“He challenged us, but we all knew that he was there to back us up,” said retired Assistant Communications Director Bill Upton. “We used to joke and say ‘what has Bob gotten us into this time?’ We felt lucky to work for him though.”

Wallace and Wood unveiled a plaque with Kalaski’s likeness, which will be mounted at the studio doors.

The Robert J. Kalaski Production Studio is the home of the IAM’s weekly live webcast Activate L!VE, which can be seen each Wednesday at 3 p.m. Eastern time on Facebook, Twitter and Youtube.