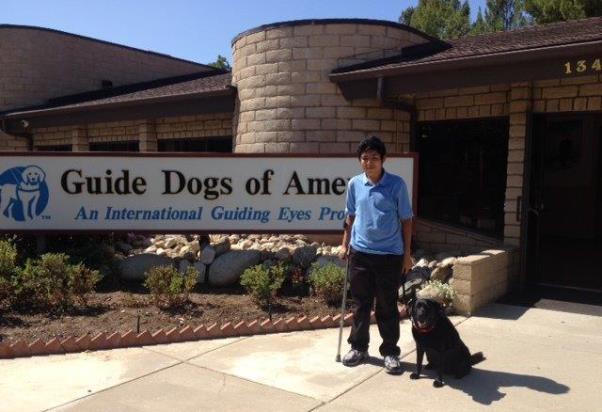 Faith, a 10-year-old guide dog, stands with her recipient Christian at the Guide Dogs of America facility in Sylmar, CA. Christian made the difficult decision to retire Faith after her eight years of service.

A 10-year-old guide dog was recently given a retirement and homecoming party to remember.

Faith, a black Labrador Retriever, is described by her raiser as a “special puppy.” She served her recipient Christian well for eight years. They had a very special relationship, says Guide Dogs of America (GDA) Puppy Department Manager Louise Henderson.

After Faith’s many years of service, Christian made the difficult decision to retire her. It was then that Amy Lyen, the woman who raised Faith, began her trip to bring Faith home from Orange County, CA to Portland, OR.

When she and Faith reached the Orange County airport, they were given red carpet treatment.

“Within a minute an Alaska Airlines employee rushed over and asked if we were going to Portland and if the dog was Faith,” said Lyen. “Each employee was quite emotional about the sacrifice that Christian has made in letting Faith retire and about the work that Faith has done. Before I knew it, the terminal had an announcement going over the general P.A. system that they were paging Faith and I. They went on and explained Faith’s history to the entire terminal and invited her up to the gate.”

“Our walk over to the gate was met with a standing ovation,” continued Lyen. “At the gate, the flight crew and gate agents were overcome with emotion as they proclaimed that this was Faith’s retirement party. They gave her a fresh flower lei, a gift bag of toys, a goody and took pictures. Then they honored her by letting us have special boarding. The flight crew was stumbling over each other to be the first to offer help, greet Faith, and talk to me to hear more about the program. Everybody on the flight was excited to have us onboard. There were few dry eyes on the plane.”

“We would like to thank all of the people at Alaska Airlines for making this day special for everyone involved,” said GDA Director Dale Hartford. “As you can see, our Puppy Raisers and graduates are very special people who truly understand and value the relationship between the blind or visually-impaired person and their canine partner. On behalf of her recipient Christian, we congratulate Faith on her retirement and thank her for her many years of service.”

“We commend Guide Dogs of America and the folks at Alaska Airlines for making this occasion so special,” said IAM Transportation General Vice President Sito Pantoja. “Faith is retiring from an extraordinary organization. We thank her for her many years of service and wish her and Amy a happy, healthy and long retirement. ”

A guide dog’s working life is about six to eight years. They begin working at about 2 1/2 years old. When it is time to retire a guide dog, the guide dog user has the choice to keep the dog as a pet, give it to a family member, or return the dog to GDA. Returned guide dogs are put into the GDA Adoption Program, which first contacts the dog’s original Puppy Raisers and ask if they wish to adopt the dog.

If they do not, the guide dog is given to a prescreened individual from a waiting list. Currently there is a four to six year wait to adopt a “career change” dog or retired guide dog.