2018 IAM Aerospace Conference Kicks Off in Fort Worth 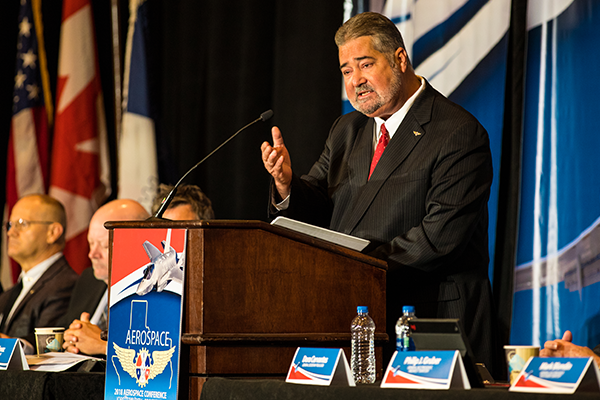 More than 300 delegates were on hand as the 2018 IAM Aerospace Conference opened Tuesday in Fort Worth, TX, the hometown of the conference’s chair IAM International President Bob Martinez.

“This Aerospace Conference comes at a pivotal time in our union’s history,” said Martinez. “And you are the people who make aerospace one of the most important industries to our economy.”

Including remarks from IAM leaders, guests and breakout sessions, the conference will focus on the key issues affecting IAM members throughout North America.

“Just look at our impact,” said Martinez. “The airlines? They wouldn’t get off the ground without the Machinists. The fighter jets and missiles keeping us safe, they would not exist if it weren’t for us. The spacecraft leading us to new frontiers? They are built and launched by Machinist Union members.

“We have a lot to be proud of Brothers and Sisters.”

Delegates will participate in breakout sessions learning about and discussing new technology in the industry, healthcare issues, negotiations, organizing and many other issues affecting members.

“Welcome to the Southern Territory, the birthplace of the Machinists Union,” said Southern Territory General Vice President Mark A. Blondin. “We are family in the South and we welcome our Brothers and Sisters from across North America to be part of the footprint we have created here.

“In the South, we unfortunately are faced with the uphill battle of Fighting Right to Work laws in most of our area. But that offers us a unique opportunity of loyalty among our members because when someone signs up with the IAM in the South, they are making the choice for a better life for themselves and their family. Especially in Aerospace where our members are helping to shape the future of the industry.”

Fort Worth native Congressman Marc Veasey (D-TX) attended the conference and told delegates how he understands the major role the Machinists Union plays in the aerospace industry and the economy.

“I will always stand up for the Machinists and their families. The IAM has created a better life for thousands of Texans.”