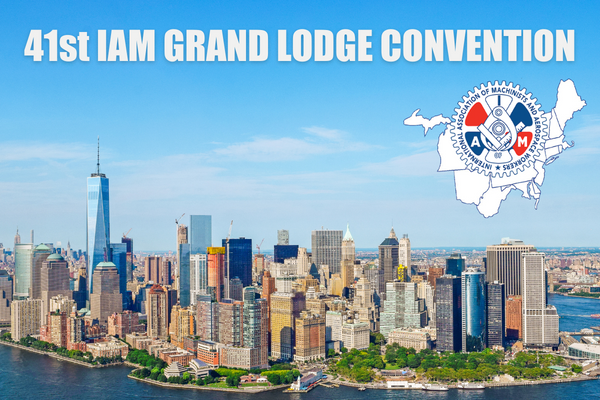 The IAM Executive Council has met and unanimously voted to hold the 2024 IAM Grand Lodge Convention at New York Hilton Midtown from September 1-6, 2024. A call letter will soon be sent to District and Local Lodges with further information.

An essential part of the Convention will be the 2024 IAM Commemorative Convention Book, and a popular feature of the book will be ads from our own Local and District Lodges. Proceeds from the ads will help offset the cost of the Convention. We will send out information early next year on how your Local or District can support the 41st Grand Lodge Convention.

“The IAM Executive Council is excited to hold the 2024 Grand Lodge Convention in New York City, a city with one of the highest union densities in North America,” said IAM International President Robert Martinez Jr. “I have full confidence that the Eastern Territory and the Host Committee will host a spectacular Convention that represents all sectors of our great union.”

“The Eastern Territory is ready to put on a Convention that will honor our past and future,” said IAM Eastern Territory General Vice President David Sullivan. “New York offers a venue that will allow our delegates to conduct the business of our union. The Host Committee is hard at work to ensure the 41st Grand Lodge Convention will be an experience that our members from all across North America will remember for a lifetime.”