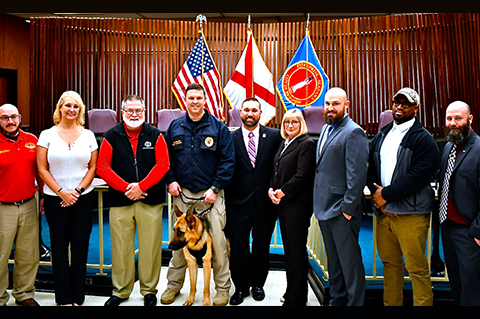 IAMAW Local Lodge 2003 and Guide Dogs of America worked together to provide the Enterprise Police Department (EPD) in Alabama a new recruit for the team that isn’t your typical law enforcement agent.

Jayco, a handsome German shepherd, became the newest member of the K-9 department in December. However, he will not be a standard canine officer. Jayco will be working with children and the community in a friendly way, allowing residents the chance to interact with the police force and its activities. He will be a part of educational exercises and building positive relations between the department and residents.

For more than a year, EPD Public Relations Officer and handler Lt. Billy Haglund had been asking for a canine for this purpose. He got the green light from Police Chief T.D. Jones saying “Let’s do it.”

“We are really excited to engage the public with this and we really believe a positive police encounter will promote another one,” said Haglund. “That’s Jayco’s mission.”

Adam Beasley, a member of Local 2003 and a volunteer for Guide Dogs of America, is really excited about this partnership.

“Not all dogs in the GDA program become a guide dog so Jayco was a perfect match for this job. He needed a career change and a new mission,” said Beasley.

As always, GDA provided Jayco to EPD free of charge while Local 2003 donated nearly $2000 to cover the transport and adoption fees to bring the dog to Alabama.

IAM District 75 which includes Local 2003 and the Guide Dogs of America are thankful to the City of Enterprise and the Enterprise Police Department for the opportunity to donate this amazing dog and hopefully start a trend that will continue across the country.