A Perfect Pairing of Science and Skill 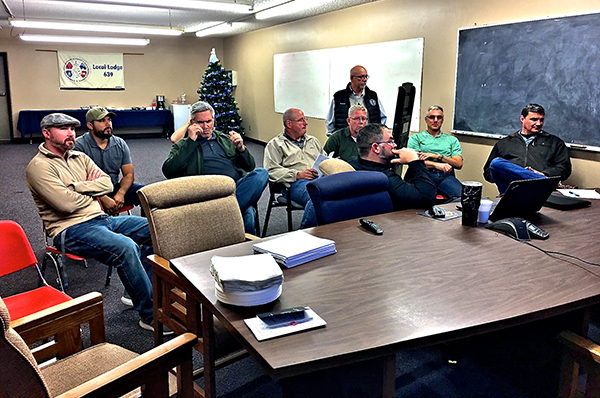 The Boeing KC-46A Pegasus is a workhorse in the air. It’s a refueler and an advanced communications hub with the ability to carry both passengers and cargo. The aircraft can accurately detect, avoid or defeat threats to our National Security. And it’s a Union aircraft, assembled by IAM Members in Everett, WA using parts fabricated by Machinist Members in the Pacific Northwest. This new tanker program will be making its debut in the IAM’s Southern Territory next month and the Machinists could not be more proud to be part of this journey.

IAM Workers at McConnell Air Force Base in Wichita, KS and Altus AFB in Oklahoma, who will play host to this new aircraft, are gathered this week for negotiations with FlightSafety Services Corporation (FSSC), the company that will oversee the program. The goal is to draw up a first contract that will protect the highly-skilled workers who will ultimately make the KC-46 a legend in the sky. 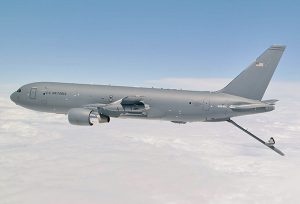 From training pilots to simulator technicians, load technicians, material handlers and air refueling and boom operators, the dedication and skill of the IAM will be found in every aspect of this aircraft.

“We have a unique opportunity in the Southern Territory as the KC-46 program is just getting off the ground at two of our locations. The Members of IAM District 171 in Oklahoma and District 70 in Kansas are able to negotiate together, providing our members with a strong contract that not only takes care of them but also provides a solid foundation for future Machinists who will join this tanker program,” said IAM’s Southern Territory General Vice President Rickey Wallace. “Together, we can show the company that we are unified in making sure that not only is this program a success but that our members are recognized and compensated for the decades of experience they bring to the table.”

“We are setting the bar, not just for IAM Members, but for all the talented men and women in this industry who will work tirelessly to guarantee that every aspect of the KC-46 will safely and effectively protect our Brothers and Sisters in the U.S. Military,” said Aerospace General Vice President Mark A. Blondin. “As this program grows, so too will the Machinists’ role in making sure this program is the gold standard for pilot training and maintaining refueling aircraft. The accomplishments of the U.S. Military in the air can’t be achieved without the hard-working IAM members on the ground.”

Negotiations between IAM and FSSC are scheduled to be on-going until January 2019. Wages, Seniority and Health and Welfare, of course, topping the priority list for the members in this group.  But it’s the pride and patriotism of our Brothers and Sisters who will work on the KC-46 that is taking center stage.

“It’s rare to see such dedicated employees like the ones in this group. They truly take this work to heart and their resolve not to make any mistakes is second to none. As they have told me, their main job is to take care of those who have chosen to protect this country by being part of the U.S. Military,” said Business Representative of District 70 Tyson Kelly.

The same sentiment resonates with the IAM Brothers and Sisters at Altus.

“To them, this job comes with a huge responsibility to make sure our country has what it needs to protect our citizens,” said President and Directing Business Representative of District Lodge 171 Rick Boardman “We at the IAM owe it to these working-class heroes to bring them the best, damn contract we can. And that’s exactly what we plan to do.”