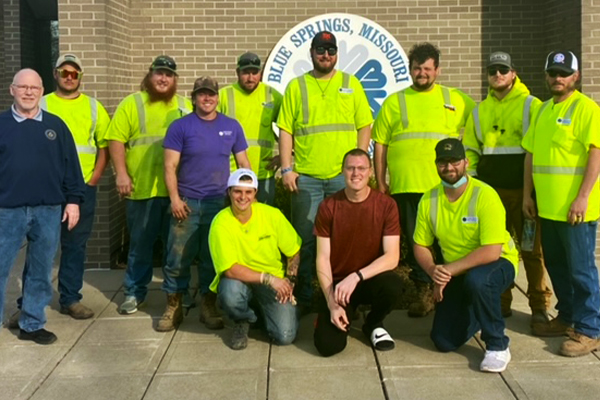 In less than six months, employees from the City of Blue Springs Public Works in Missouri went from voting to join the Machinists Union to enjoying the benefits of union representation with a first contract. Workers from the water department, fleet services and sewer maintenance fields demonstrated hard work and solidarity during negotiations, bringing home a strong contract and a win for all in the Blue Springs community.

“The negotiating committee did an outstanding job obtaining a first contract,” said IAM Local 778 Business Representative Scott Brown. “Their knowledge and experience with the work they provide to the City of Blue Springs was a great asset at the bargaining table. We’re all looking forward to working with this group for many years to come.”

Among other items, the three-year contract offers wage increases of more than 2.5% per year, with top scale workers earning a higher percentage yearly, protected holidays, defined seniority rules and the addition of a safety and a labor/management committee to help the employees and the city work together. Language surrounding steward policies and union leave were also added, as well as the addition of a fair grievance procedure.

“These negotiations were a little unique due to the pandemic, but the team prepared for months via email and surveys and in a safe manner, worked with the committee members in-person when it was needed,” said IAM Local 778 Directing Business Representative Joe Capra. “I want to thank the committee and Scott Brown for their preparation, dedication and long hours which paid off in for a contract deserving of the workers they serve.”

“This is how the system should work,” said IAM Midwest Territory General Vice President Steve Galloway. “In less than six months from the time these members voted overwhelmingly to join the IAM, they were able to negotiate a strong IAM contract that will benefit all working families in Blue Springs. I applaud their steadfast diligence and solidarity at the negotiating table and I welcome another strong IAM contract into the legacy of the Machinists Union.”