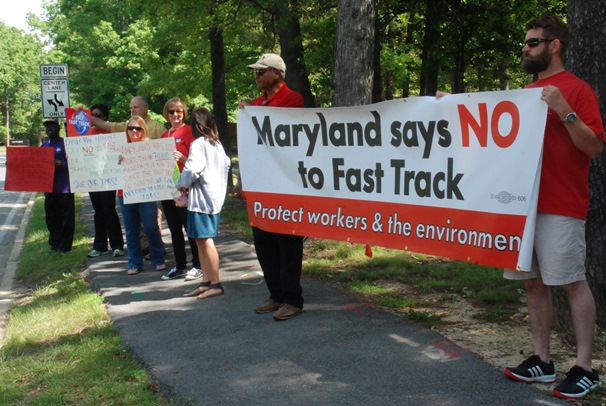 A small but determined group of union members and community activists gathered at Rep. Steny Hoyer’s district office in Waldorf, MD to urge Hoyer to vote “no” on Fast Track Trade authority that if passed, will make it easier to pass the flawed Trans-Pacific Partnership (TPP)  trade agreement.

Hoyer represents Maryland’s 5th Congressional District and is the Minority Whip, the No. 2 Democratic party leadership position in the House. Hoyer has supported past trade deals and keeping pressure on him and other members of Congress is critical to defeating Fast Track and protecting North American workers.

Click here to view more photos from the rally.

“It’s important that American workers get a fair chance at decent-paying jobs,” said retired IAM District 4 member Lonnie Vick who attended the rally. “Bad trade deals like NAFTA have already cost hundreds of thousands of jobs and it’s unthinkable the amount of jobs that will be lost under TPP. And it’s not just about jobs, TPP is a danger to food safety, our environment and prescription drug prices. All of these issues go hand-in-hand.”

The Senate has moved closer to passing Fast Track Trade authority and the House Speaker John Boehner has signaled that a vote in the House on Fast Track could happen in June.

TAKE ACTION: Click here to email Congress to vote “no” on Fast Track for the TPP. Call your Senators and Representative at 202-224-3121.