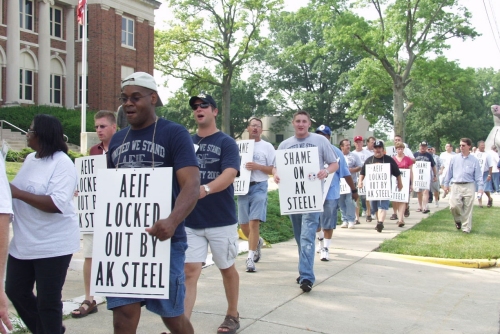 Marching in the shadow of a giant rat, more than 100 locked-out workers delivered an unmistakable message of unity and defiance to managers inside AK Steel Corp. headquarters in Middletown OH.

Triggering nearby car alarms with their chanting and backing down company security guards when they approached union members, the marchers made their case: “We want this lockout to end, we want a secure pension and we want to get back to making steel,” declared Brian Daley, president of the Armco Employees Independent Federation (AEIF), the independent union representing 2,200 locked out workers at the mill.

The nearly five-month long lockout led AEIF leaders in May to propose joining with the IAM in a move that would give members access to the IAM National Pension Fund. Finding a replacement for AK Steel’s under-funded pension plan was a key issue for AEIF members and officers.

The National Labor Relations Board (NLRB) has set July 26-27 as dates for an election that will determine representation for the workers at AK Steel. Click here for more information.