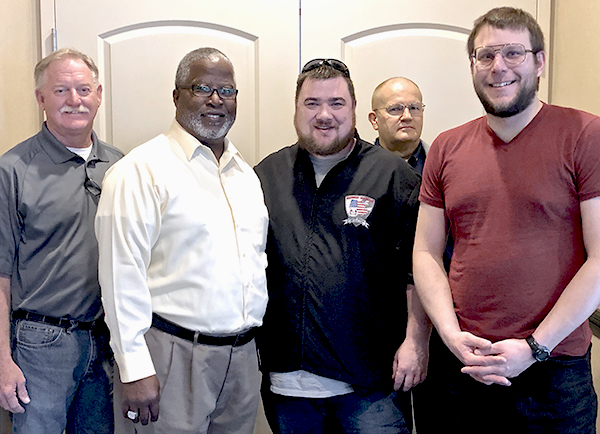 “We must work together to take care of the Working Class,” said IAM Southern Territory General Vice President Rickey Wallace. “Southern Territory, Midwest Territory, Canada and the USA…we are all in this together. We are all fighting for workers. That especially rings true for a cutting edge industry such as Aerospace.”

The IAMAW’s aerospace contracts have left a footprint throughout the industry and across the territories of the Machinists Union. So it’s not uncommon for a contract negotiation to include members from different area codes. That’s what happened with a group of employees working under an Aero Simulation, Inc. (ASI) contract. Part of the group works in South Dakota, the other Texas. These hard-working men and women maintain the Air Force B-1 Bomber flight simulators, while simultaneously keeping the technical manuals updated.

“The key component to any successful negotiation is teamwork. Our IAMAW teams at Dyess Air Force Base (AFB) in Abilene, TX and Ellsworth AFB in South Dakota worked together toward a common goal, which was a fair and equitable contract for our members and their families,” said Aerospace Coordinator and negotiator Tony Blevins. “Taking the expert knowledge from our members on the shop floor, experiences from District Lodge 776 and District Lodge 5, along with a seasoned group of negotiators was a recipe for success.”

“Congratulations to the men and women of IAM Local 2525/District 5 at Ellsworth AFB in South Dakota and Local 2771/District 776 at Dyess AFB in Abilene, Texas,” said IAM Midwest Territory General Vice President Steve Galloway. “With your solidarity and support, our committee was able to negotiate an agreement that is just and fair. Negotiations are never easy – but when workers stand together, we have power. That power makes the American Dream more possible for everyone.”

The Machinists Union wants the Air Force B-1 Bomber program to be a success and with this new agreement; this company will become an employer of choice for many. Wins in the three-year agreement include general wage increases of anywhere from 4 to 5% for the life of the contract, increases to health and welfare benefits in excess of $2.50 per hour, added shift bonuses of $2.00 per hour in 2020 and reconciliations of outdated overtime and arbitration clauses.

“We were able to negotiate a three-year contract that gives these workers a better future,” said IAM Aerospace General Vice President Mark A. Blondin. “Often we forget, a pay raise is much more to working families than just dollars and cents. It’s a chance for a family to spend more time together, maybe ease the burden of some debt or even give our union brothers and sisters a step up in saving for their children’s futures. It’s not just a money issue for us when we are at the bargaining table, it’s a family issue.”

In the end, the contract is a win-win for both ASI and IAM. But ultimately, it’s the working-class heroes and their families, who make sure the U.S. Air Force has what it needs to remain the best, that are the true victors.