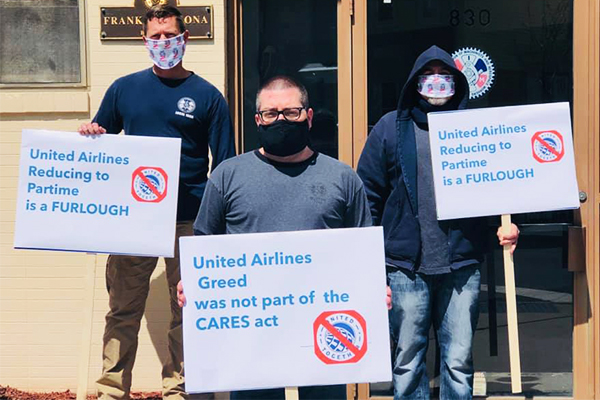 The IAM’s campaign and the resulting public outrage against United Airlines has caused the carrier to back away from its illegal scheme to force 15,000 full-time IAM members into part-time positions.

After accepting $5 billion from taxpayers as part of the CARES Act, United made the unilateral decision to drastically reduce the wages, retirement benefits, and paid leave of IAM-represented Fleet Service and Passenger Service members.The IAM quickly responded with a lawsuit, alleging United had violated the intent of the CARES Act, as well as the Railway Labor Act and the IAM’s collective bargaining agreements with the carrier.

United has since changed course, instead offering IAM members the opportunity to voluntarily work fewer hours without losing their full-time status. The carrier, however, has left the door open to resuming its forced reduction to part-time program.

“While today it appears that, thanks to your hard work and solidarity, we have won an important battle, we have not yet won the war,” said IAM Transportation General Vice President Sito Pantoja. “We will monitor United’s action closely to see what further legal and congressional action may become necessary.”

The IAM’s campaign captivated the attention of the entire labor movement, since United’s action threatened to spur other companies to mistreat workers while accepting taxpayer dollars from coronavirus relief legislation. The International Transport Workers’ Federation supported IAM members in a letter to United Airlines, urging the carrier to reconsider forced layoffs.

IAM International President Robert Martinez Jr. and AFL-CIO President Richard Trumka sounded the alarm with President Trump, asking the White House to step in and prevent United from moving forward with the furloughs.

“With over 30 million Americans out of work, now is not the time for unscrupulous companies to undermine the clear intent of the federal relief effort aimed at worker retention,” wrote Martinez and Trumka. “Is it too much to ask corporations like United to honor their commitment under the CARES Act?”

The IAM’s campaign made national headlines, including in the Chicago Tribune, CNBC, Forbes and CBS 2 Chicago.

The IAM represents more than 30,000 members at United Airlines and is the largest airline union in North America.