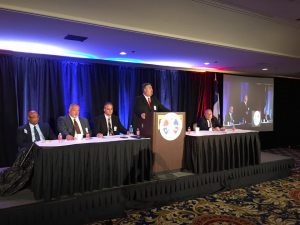 IAM District Lodge 141 held its bi-annual convention this week in Las Vegas, NV. The event was highlighted by a strong showing of solidarity from the delegates, contracts that have set the standard in the airline industry and a return to financial stability for the lodge.

“I congratulate President Mike Klemm, his staff and the members of District 141 for all the time and hard work they put in to move this District forward,” said Transportation General Vice President Sito Pantoja. “The successes they have achieved are only the beginning of bigger and better things to come.”

“I’m proud to be with District 141 members who have demonstrated the essence of the Fighting Machinists,” said IAM International President Bob Martinez. “The gains District 141 members have achieved over the past year are truly remarkable and a testament to the district’s hard work and membership’s unity.”

DL 141 has seen an increase in new membership and significant financial growth. The contracts won this past year by United, American and Hawaiian Airlines negotiating committees have led the industry and demonstrated the benefits of coordinated bargaining by all represented classifications.