Alabama Local 2003 on Strike for Respect 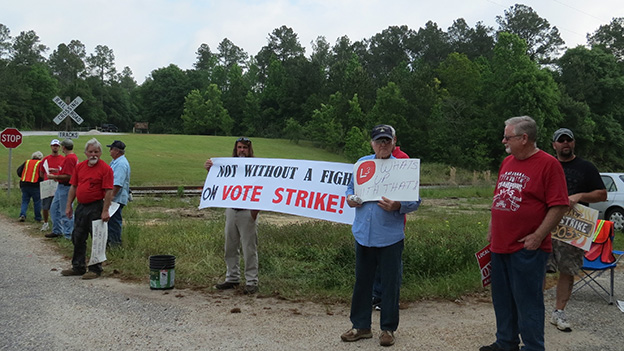 Nearly 3,000 members of IAM Local 2003 in Daleville, AL are on strike against Army Fleet Support (AFS) at Fort Rucker after voting to reject a “last, best and final” offer from parent company L3 Communications.

IAM members at AFS provide helicopter maintenance, service and training at Fort Rucker under a $2 billion contract from the U.S. Army that runs from 2012 through September 2017.

Key issues in the dispute include duration of the proposed accord, inadequate training and increased workloads, in addition to language changes regarding seniority, overtime procedures and transfers.

“It’s not about money,” said IAM Local 2003 member Bob Bowman in a local news article. “We just want to be treated with respect.”

Area residents, supporters and spouses took to Facebook and social media outlets where they echoed the concerns of IAM strikers at AFS.

“The IAM is communicating with our membership, and is in contact with AFS and the Federal Mediation and Conciliation Service (FMCS) in order to build a path forward to resuming negotiations, solving the problems and returning our members to the mission at Fort Rucker,” said IAM Southern Territory Communications Representative Bob Wood. “These are highly trained professionals with a fantastic safety record. Their concerns deserve to be treated with respect.”