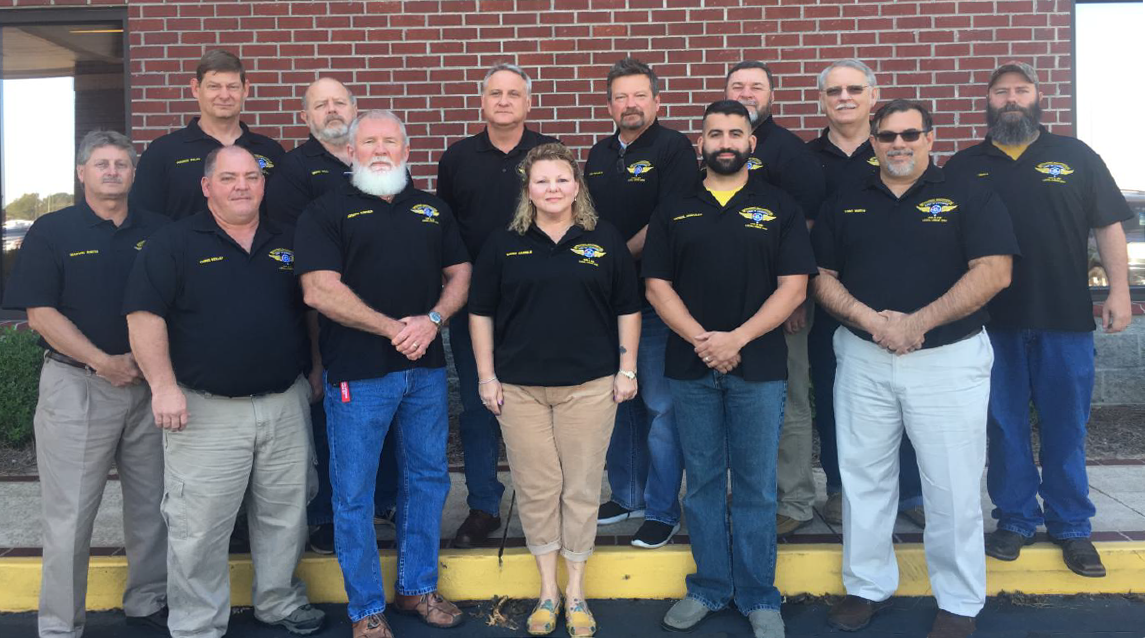 The Machinists share a legacy with Fort Rucker Army Base spanning more than six decades. The men and women who have made this post a leader of aviation excellence share a sense of pride in their work not often seen these days. It’s the working hands of our members from local lodge 2003 who maintain the helicopters used to train U.S. Army pilots operating around the globe. The importance of this work is not lost on anyone in the IAMAW as the prowess and dedication of our union family touches every pilot serving at the highest honor of protecting this country and its citizens.

So when it’s contract time, the nearly 3100 Brothers and Sisters at Fort Rucker take it to heart that they’re casting a vote not just for themselves and their loved ones, but for the Machinists who will continue this rich history for generations to come. With 98 percent voting to accept, the members of 2003 have obtained another strong IAM contract with M1 Support Services that will cover the next three and half years.

“For decades, the Machinists have left their mark at Fort Rucker with every contract they have negotiated; agreements that have set the standard for workers around the world,” said IAM’s Southern Territory General Vice President Rickey Wallace. “The hard work put forth by this negotiating team and all who were involved is a striking example of this union’s dedication to ensuring workers remain the heartbeat of the aerospace industry and ultimately, the key to its future success.”

Aerospace General Vice President Mark A. Blondin agrees, adding that these workers deserve recognition for the dedication and skill they bring to this program.

“The IAM’s footprint at Fort Rucker has led this union to change the trajectory of the aerospace industry,” said Blondin. “Our reputation in this field precedes us at every bargaining table we approach and that’s because our goal remains to keep workers at the forefront of the contracts we negotiate. When we take a seat at the table, we do so knowing that we hold the fate of the working class in our hands.”

Financially, the M1 contract is solid with members enjoying a general wage increase of about three percent each year and a $1.00 per hour increase to pension contributions. But money was not the motivating force of the negotiating team representing the members of 2003.

Since this agreement covers a multitude of fields and aircraft, it was imperative for the membership to have more freedom to move between locations, which the committee was able to secure. Major improvements were made to seniority in the areas of displacement, when reclassifying to a higher classification and in the selection of start time. The committee was able to offer improved language to better equalize overtime while also reducing the cost share of medical insurance and strengthening the life insurance policies provided by the company. It’s these fine details that will set the stage for negotiations in the future and raise the bar for workers across the industry in the present.

“The success of these negotiations are directly attributable to the support, preparation and experience that was brought together as one cohesive IAM team, and the respect and willingness M1 offered to the committee to work together and find solutions. For me, it was one of the most successful negotiations of my career,” said District 75 Business Representative Randy Garrett.

Garrett believes the spirit of cooperation and understanding built at this table will be the foundation for leading edge negotiations in the future. Southern Territory Grand Lodge Representative Tony Wirth agrees.

“This contract represents what can be accomplished when a company works with their employees rather than pitting the two sides against each other,” explained Wirth. “We all share the same pride in delivering the safest and best product possible. Especially at Fort Rucker where our work entails taking care of those who ensure and protect this country. It may sound cliché or overused, but in this instance it’s true. The members of local lodge 2003 are Patriots, doing their part to make sure the United States is always the land of the free and the home of the brave.”