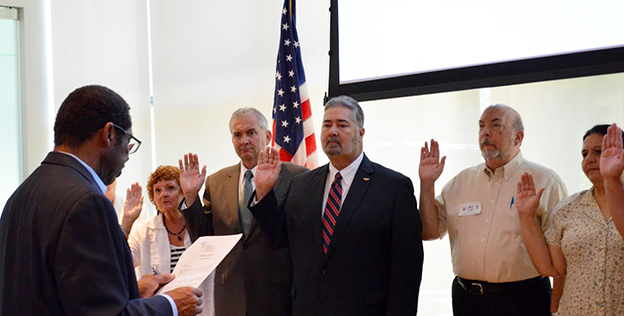 IAM International President Bob Martinez was sworn in to the Alliance for Retired Americans’ Executive Board this week.

IAM International President Bob Martinez was sworn-in this week as an executive Board member of the 4.4 million-member Alliance for Retired Americans. The swearing-in marks the latest chapter of the IAM’s ongoing association the Alliance, where former IAM International Presidents George Kourpias and Tom Buffenbarger served as President and Board member, respectively. Retired IAM Secretary-Treasurer Robert Roach, Jr. serves as the current president of the Alliance.

The Executive Board, together with the Alliance’s four officers, sets the strategic direction for the organization and ensures that it is meeting its mission and responsibility to its members.

In his first official act as a Board member, President Martinez put forward a motion to endorse Secretary Hillary Clinton for President, which was enthusiastically adopted by the Executive Board.

“The work the Alliance does for seniors and retirees has never been more important,” said Martinez. “Our endorsement of Hillary Clinton reflects our common commitments to strengthen Social Security and Medicare, defend traditional pensions and control runaway drug prices. No other candidate comes close.”

The Alliance for Retired Americans is a national, grass roots advocacy organization with more than 4.4 million members and 1400 local chapters. It fights to protect the rights and well-being of retirees and their families across the United States. Click here to read the Alliance’s statement on the Clinton endorsement.