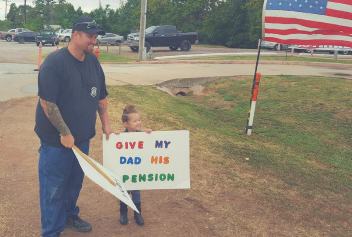 The company responsible for forcing 243 IAM members on strike to protect their pension and health benefits may soon be subject to a Department of Labor investigation for violating the Service Contract Act.

The IAM filed a DOL complaint against Alutiiq, a subsidiary of the Alaska Native Corporation Afognak, on September 26.

“The employer is systematically and continuously violating the Act by refusing to provide many service employees the benefits to which they are entitled by law,” reads the complaint.

IAM members at the base voted down the conciliatory offer, and began a strike that’s now in its ninth week.

“The Southern Territory is proud of the members of Local 850 for standing together and staying strong,” said Southern Territory General Vice President Mark Blondin. “The IAM is leaving no stone unturned in ensuring that Alutiiq stops their actions and comes to the table with a fair and equitable offer to end this strike.”

Then, sign a petition to Alutiiq’s board demanding the company restore their employees’ negotiated benefits and end the strike.