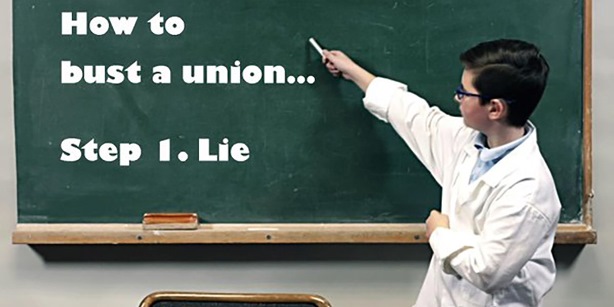 An article in The New York Times brings to light a tall tale told by an Amazon manager in Delaware who was trying to dissuade workers there from organizing with the IAM.

Kellen Wadach, the general manager at Amazon’s warehouse in Middletown, DE, told hundreds of workers that his father’s union didn’t help his family financially, or even send a condolence card, after his father died suddenly in front of his childhood home.

“The problem with Mr. Wadach’s story was that much of it appears to have been untrue,” the article says.

The article references an obituary saying Wadach’s father, Peter Wadach, died while on a family vacation in South Carolina, not in front of the family house in New York. That obituary and another news story say Peter Wadach was a partner at an insurance agency for nearly three decades before he died at age 49.

The article continues: “For years, Amazon has successfully battled to keep unions out of the company. And the incident involving Mr. Wadach was an illustration of how important it was to Amazon — or at least to some of its employees — to keep it that way.”

“Union officials think Amazon fights so hard to keep them at bay to prevent a domino effect among its warehouses,” the article reads.

“This is Amazon’s biggest fear,” IAM District 1 Organizer Andy Powell, who is trying to organize Amazon fulfillment center workers in Delaware and several nearby states, told the Times.

The New York Times could not reach Wadach for comment and an Amazon spokesperson told the reporter that Wadach was no longer with the company.