An Old Clock with a Timeless Story 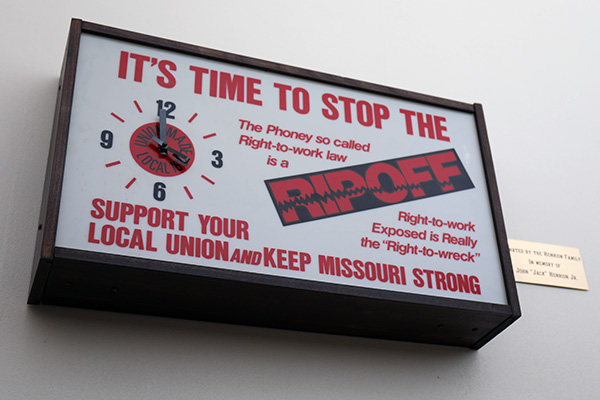 On the wall, just outside classroom A at the William W. Winpisinger Education and Technology Center, is the new home of a clock with an important past.

Forty years ago the clock was used by John “Jack” Henrion Jr. and other union members in Missouri to soundly defeat proposed so-called right-to-work legislation in the state.

John Henrion, a good friend of IAM Grand Lodge Auditor Bryan Pinette, came across the clock when he was cleaning out his late father’s basement. Discovering it brought back fond memories of how important the fight was to his father and his family. John knew right away that his dad would want Pinette to have it.

“To be honest, I was excited to receive the clock; Jack was a mentor and friend,” said Pinette. “When he brought out the box and opened it, I was blown away with the condition. It was a no brainer that this clock couldn’t just sit in my office.”

Pinette hoped it could be donated in Jack’s memory to the Winpisinger Center. He contacted its director, Chris Wagoner, and arrangements were made to permanently display it at the Harbor.

“This clock dates back to the last serious right to work fight in Missouri, a fight we won then,” said Wagoner. “It serves as a reminder to all of us that our enemies never sleep, so we always have to be ready to fight.”