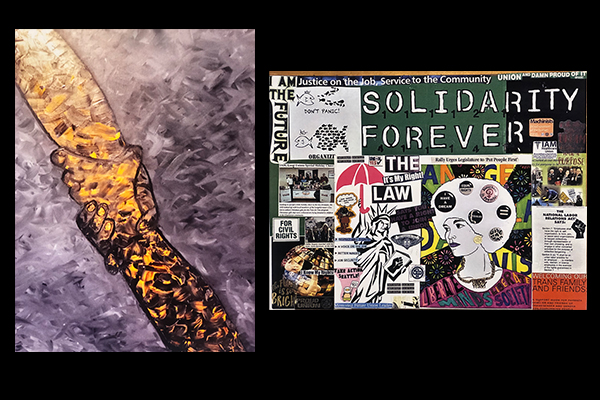 “Everyone who has received a copy of the calendar loves it – not only because it celebrates the incredible creativity of our students but because it also offers a snapshot of labor history at your fingertips,” says university spokesperson Solomon Syed. “Too many people are not familiar with labor’s rich history and how it has benefitted all working people.”

A photo of an album cover for a re-mixed version of the popular labor song “Solidarity Forever” represents the month of January and was created by IAM Organizing Grand Lodge Representative Gabrielle Rogano. The original image is a collage composed of union literature, images of women workers and colorful font.

“It took me a full day of crafting. The center piece is made from a canvas which is glued onto a piece of cardboard,” said Rogano. “It feels phenomenal to have my artwork featured.”

IAM District 141 member Victor Acosta’s artwork appeared on the back of the calendar. The painting entitled “Helping Hand” shows a greyish white background with two brown arms extending and shaking hands. Acosta says it represents the relationship between union members and the district’s Employee Assistance Program (EAP), an employee benefit program that assists workers with personal problems such as mental and emotional well-being.

“The artwork is an oleo or oil as it is known and took three hours to complete. The canvas size is 18×24 inches,” said Acosta, District 141 EAP Department Regional Coordinator. “I’ve been an artist since early childhood. Early in my youth I learned how to produce acrylic, watercolors, pastel and oil art.”

The first calendar was released by SUNY Empire State College in 2020 and the university plans to create another edition in 2022. Invitations to submit artwork are offered to students who are enrolled in the Labor Studies program. Since 2014, the IAM has partnered with SUNY Empire State College to offer degrees in labor studies through the Harry Van Arsdale, Jr. Center for Labor Studies.

More information on the IAM’s partnership can be found here.