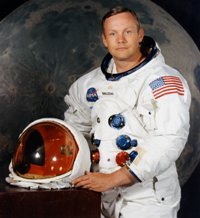 The first man to walk on the moon has launched a highly unusual and public attack on President Obama’s decision to eliminate the Constellation program, a move he said would be “devastating” and risk putting America’s space superiority on “a long downhill slide to mediocrity.”

Apollo 11 commander Neil Armstrong made the charge in an open letter to the president that was also signed by Apollo 13 commander Jim Lovell and Apollo 17 commander Eugene Cernan, the last man to walk on the moon.

“ World leadership in space was not achieved easily,” wrote Armstrong. “In the first half-century of the space age, our country made a significant financial investment, thousands of Americans dedicated themselves to the effort, and some gave their lives to achieve the dream of a nation.”

The letter, issued two days before a visit by President Obama to the Kennedy Space Center, is a marked departure for U.S. astronauts, who rarely speak publicly about matters of policy or funding. Armstrong warned the president that the loss of funding for the Constellation program, its accompanying Ares 1 and Ares V rockets and the Orion spacecraft, would cripple the nation’s space ambitions and force U.S. astronauts to hitch rides on Russian spacecraft to get to the International Space Station.

“ America must decide if it wishes to remain a leader in space,” the letter concludes. “If it does, we should institute a program that will give us the very best chance of achieving that goal.”