The 2013 IAM Staff Conference closed with a rousing march to the Georgia State House and a rededication of Machinists Union founder Tom Talbot’s statue in Atlanta’s historic Grant Park. The three-day conference brought hundreds of IAM staff members back to the union’s birthplace, where 19 Machinists secretly gathered in a locomotive pit to establish the IAM 125 years ago.

To get the staff thinking about the union’s rich past, IAM International President Tom Buffenbarger called on 83-year-old actor and labor activist Ed Asner to portray Talbot in a monologue before the march. Asner is one of a handful of honorary lifetime members of the IAM.

Led by the beat of bagpipes and drums and bearing signs that proclaimed the IAM as “Atlanta’s Hometown Union,” staff members paraded to the steps of the State Capitol. Despite the IAM’s beginnings in Georgia, Republican legislators have since passed “right-to-work” laws that divide workers and make it difficult for employees to organize and bargain collectively.

Georgia Democratic State Rep. Gloria Frazier told the crowd she will never let her colleagues in the George State Assembly forget how important it is to support working families.

“The first thing they told me when I got my first job at the age of 18 was to not join the union,” said Frazier, who co-sponsored a resolution commemorating the IAM’s 125th anniversary and its Atlanta roots. “So what was the first thing I did? I joined the union.”

The Georgia State Senate passed a similar resolution, praising the IAM for continuing to represent “hundreds of thousands of working men and women across the United States and Canada in the same spirit that led sons of Georgia to establish it more than a century ago.” A proclamation from the Atlanta City Council declared May 5, 2013, “International Association of Machinists and Aerospace Workers’ Day” in the city.

Also speaking at the State Capitol, U.S. Rep. Hank Johnson (D-GA), criticized Republican state and national lawmakers for continuously bowing to the interests of the American Legislative Exchange Council (ALEC), a special interest group that has drafted anti-worker legislation for Republican legislatures all around the country to rubber-stamp into law.

“They are doing the work of corporate bosses,” said Johnson. “We are fighting for jobs, benefits and fair wages.”

“The 1948 Grand Lodge Convention saw fit to place this statue of Tom Talbot here in this park,” Buffenbarger told the crowd. “It gives me great honor to rededicate it to the founder of our great union.” 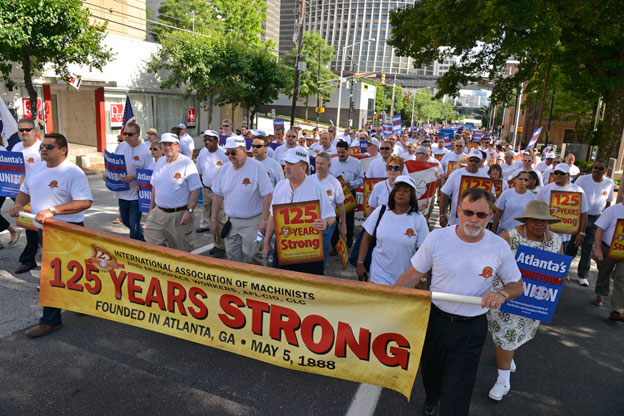 IAM International President Tom Buffenbarger and members of the IAM Executive Council lead participants to the 2013 IAM National Staff Conference in Atlanta on a march to the Georgia State Capitol.