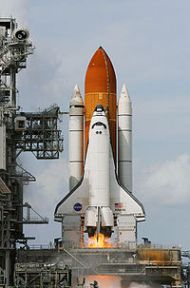 The scheduled launch of the space shuttle Atlantis on July 8 will mark the end of U.S. manned space flight for years to come and leave thousands of dedicated U.S workers out of jobs.

“As Congress and the Obama administration debate and delay, the people who worked hard to make America number one in space are now facing an uncertain future,” said IAM President Tom Buffenbarger. “The space program is our nation’s path toward manufacturing innovation, scientific leadership and engineering dominance. Any future space program should make use of the highly-skilled workers who dedicated their lives to making sure America is a leader in space travel.”

The space shuttle succeeded the Apollo program that put U.S. astronauts on the moon. The shuttle was designed as a reusable vehicle for projects in near earth orbit such as the Hubble telescope and the International Space Station (ISS).

A compromise between the Obama administration and Congress resulted in continuation of parts of the Constellation program, including the new crew capsule and development of a heavy lift rocket. But the Republican takeover in the House in 2010 has put solid funding for the program in doubt, including a promise to provide $40 million in aid to workers and communities impacted by the wind-down of the shuttle program.

“Workers in the Space Coast of Florida, Texas and across the nation built the finest space program in history,” said Buffenbarger. “Our nation should never relinquish our standing as a leader in space or ever forget the workers who make that possible.”