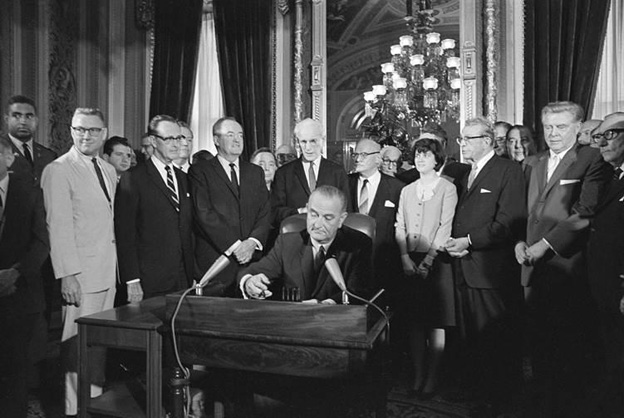 Surrounded by congressional leaders, President Lyndon B. Johnson signs the Voting Rights Act on August 6, 1965 in the President’s Room of the Capitol.

Tuesday, August 6, 2013 marks the 48th anniversary of the signing of the landmark Voting Rights Act.

Despite being viewed as one of the most successful pieces of legislation born out of the civil rights movement, in June 2013, the U.S. Supreme Court gutted the Voting Rights Act by striking down Section 4, the provision that designates the formula used to determine which parts of the country must have changes to their voting laws cleared by the federal government.

Civil rights, labor, faith-based and community organizations across the country demand Congress take action to restore the protections granted by the Voting Rights Act and protect every Americans right to vote.

Voting rights will be a key component of this year’s celebration of the 50th Anniversary of the historic March on Washington for Jobs and Freedom, just as it was during the original march. As part of a week-long series of events to commemorate the march anniversary and Dr. King’s famous “I Have a Dream” speech, the IAM is joining thousands on Saturday, August 24, 2013 at the Lincoln Memorial in Washington, DC, for a new march and rally.