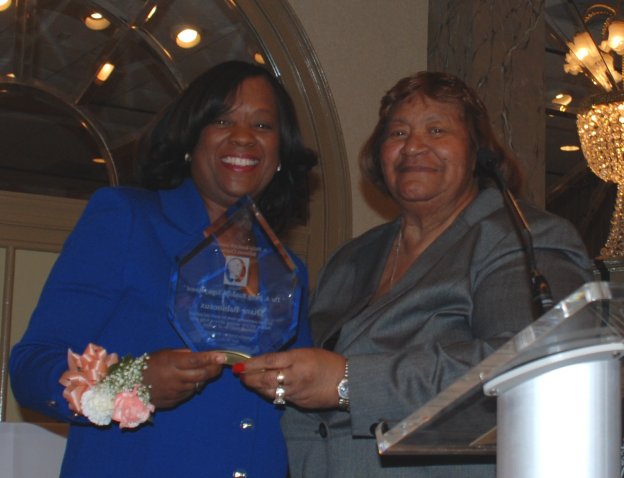 At an awards ceremony in Baltimore, MD, the president of the A. Philip Randolph Institute’s Baltimore chapter presented the group’s 2012 Legacy Award to Diane Babineaux in recognition of her decades of work for political freedom and economic justice. Babineaux, who serves as the IAM’s Chief of Staff to the International President, and also coordinates the Machinists’ myriad civil rights activities.

The award was formally recognized by state and national lawmakers who sent letters and certificates of congratulations. “Hat’s off to tonight’s award winners,” said Maryland Democratic Senator Barbara Mikulski. “Diane Babineaux is a terrific choice for the A. Philip Randolph Award for her more than four decades of work and leadership in the IAMAW.” Additional acknowledgements were received from Sen. Ben Cardin (D-MD), Rep. Elijah Cummings (D-MD), Maryland Democratic Gov. Martin O’Mally and Baltimore Mayor Stephanie Rawlings-Blake.

Founded in 1965, the A. Philip Randolph Institute was created to build on earlier efforts to end segregation and promote economic justice for African-American workers. In addition to serving as the President of the Brotherhood of Sleeping Car Porters, Randolph was the driving force behind presidential executive orders ending segregation in the military and federal employment. Randolph also organized the 1963 March on Washington for Jobs and Freedom.

“Diane Babineaux’s work on behalf of her union and her community make her a most worthy recipient of the APRI Legacy Award,” said IAM International President Tom Buffenbarger, who attended the award ceremony. “She carries the IAM message of ‘Justice on the Job and Service to the Community’ at every opportunity, most recently by marching the full 50-miles from Selma to Montgomery, AL to draw attention to the latest assault on voting rights and immigrant rights.”