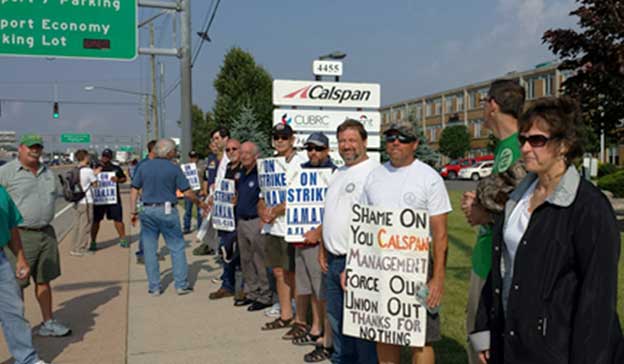 The workers previously rejected multiple offers from the company that included draconian changes to work hours, schedules and mandatory overtime.

The Local 1180 members successfully retained their original 401(k) plan, and gained wage increases for all members under the collective bargaining agreement, instead of a select few as originally proposed by the company. Strikers also blocked the company’s attempt to rewrite the agreement to move five key benefits from the agreement to the employee handbook, which could be unilaterally modified without notice or input from employees.

“These members stood shoulder-to-shoulder to take on this overzealous and needlessly greedy employer,” said IAM District 65 Business Representative Pete Cooney. “This strike is a great victory over an attempt to impose concessionary proposals on our members, their families and this community.”??

“This fight was for working men and women across the state of New York and beyond,” said IAM Eastern Territory General Vice President Lynn D. Tucker, Jr. “A strike is never easy, but our members and leadership can hold their heads high and stand proud for pushing back against this attack.”