Beyond the Mission: A Soldier’s Calling

This article first appeared in the Summer 2018 IAM Journal. 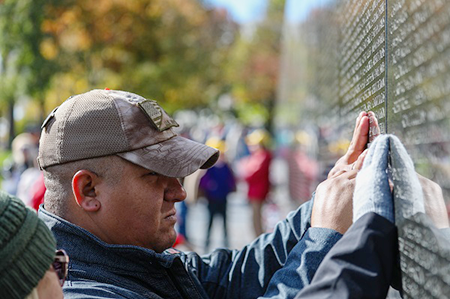 As the sun rises on a humid Saturday morning in eastern Texas, a dozen or so hunters quietly wait for the opportunity to put a bead on their first bird of the day. Yesterday well before dawn, the men and women were miles off shore fishing on Baffin Bay.

“I didn’t know what to expect when I got here,” said U.S. Air Force veteran Neil Schwarz. “I spent an incredible day on the water yesterday and caught a bunch of fish. We had a great party last night. This weekend ended up being way better than I could have ever expected it to be.”

The weekend of food, fun and camaraderie is a gift for wounded and deserving military veterans. This year the family of a fallen Marine was also invited.

A fellow veteran and his wife organize the annual event with support from family and an appreciative community. It could be said the U.S. Army veteran Gumecindo De La Rosa was born to make a difference. The event, named the Veterans Cast n’ Blast on Baffin Bay, is just a part of his mission to support his veteran Brothers and Sisters.

De La Rosa is an IAM Local 2340 member who works as a ground support equipment mechanic at Naval Air Station Kingsville, TX. He’s a hard-working husband and father of two who possesses an insatiable drive to support and honor veterans and families of fallen heroes. But the story of his cause is rooted prior to joining the union, before he served in the Army and even before his birth. 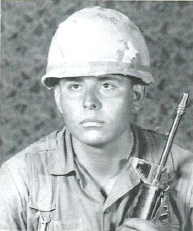 Gume, as he’s called by most, was born a little more than 11 years after the death of his uncle, Gumesindo De La Rosa. Throughout his young life he was told about his uncle and why he carried his name.

As a 19-year-old helicopter gunner in Vietnam, his namesake had taken three bullets during a battle, yet continued to protect fellow soldiers. A medic came to his aid, but neither left the battlefield alive. That day was November 12, 1969. Gume will never forget the date or the heroic uncle he never met.

“As a kid growing up, I always heard the story,” said De La Rosa. “My dad kept on telling me that ‘you never have to prove yourself to anybody.’ But I just felt like I had big shoes to fill.”

Two weeks after graduating high school at 17, he joined the Army.

“Five and a half months after going through basic training, I found myself in Kosovo,” said De La Rosa. “And I grew up very fast. I’d just seen the air strikes on TV in high school when I had to do my current events.”

Nearly three decades had passed since his teenage uncle found himself overseas in harm’s way. Now the younger De La Rosa was in similar peril.

Gume was stateside in 2001 training as an Army combat engineer and watched as the worst terror attack on U.S. soil since Pearl Harbor unfolded on television.

“When September 11 happened, it was kind of a blur – a shock,” said De La Rosa. “I started to see the buildings collapse, and I said ‘we’re rolling somewhere. I just don’t know where we’re going.'”

The next De La Rosa knew he was in Uzbekistan setting up a base camp to process incoming troops going into Afghanistan. In December 2001, he found himself involved in the first major Afghan engagement against the Taliban at Tora Bora, where Osama Bin Laden was believed to be hiding. He also served in Kandahar, Kabul and throughout much of northern Afghanistan.

After his first term in the Army, he re-enlisted as a reservist for another four years. While in the Army reserves he met Melissa, who he would marry in 2004. They returned to his hometown of Riviera, TX and started a family.

After leaving the Army, De La Rosa struggled to find a meaningful way to honor others who had returned from service.

“I knew God had blessed me and my family,” said De La Rosa. “I wanted to use some of those blessings to give something back.”

A little over four years ago, Gume and Melissa came up with an idea while having coffee on the back patio of Ranchito de Quatro Rosa, the ranch they had just purchased.

“After 10 years of marriage I started opening up to her about the inner demons I fought as a veteran, and I told her I wanted to help my Brothers and Sisters,” said De La Rosa. “The suicide rate for veterans is 22 a day. I said if I could at least help one veteran, I’d feel like I’ve done my job.”

As bird hunters, Gume and Melissa decided they would invitee vets down for a weekend of hunting but weren’t sure how to proceed. They partnered with Veterans Outdoors and were convinced to include a fishing event in the weekend since their home is located so close to Texas’ Baffin Bay. Veterans Outdoors’ mission is to honor our country’s wounded veterans with physically and emotionally therapeutic outdoor related activities.

“So we added the ‘cast’ part to the ‘blast,’ and we created the Veterans Cast n’ Blast on Baffin Bay,” said De La Rosa. “Once this weekend is complete, we will have gifted 50 veterans. This weekend’s group includes the most Purple Heart recipients that we have ever hosted.”

The Veterans Cast n’ Blast weekend includes housing, meals and a fishing boat with tackle and crew for each veteran, shotguns for the bird hunt and a surprise awards dinner. The final event also acts as a fundraiser to help Veterans Outdoors continue its mission.

The De La Rosas are quick to admit that they could not pull off such an event without the army of volunteers and donors that have stepped up to help.

Sponsors from the area and across Texas donate food, auction items, a stage and lighting and the myriad other pieces that need to come together. Countless hours of work by volunteers, including Local 2340 members, transform a field on De La Rosa’s ranch into a vibrant event venue. It takes the entire year to coordinate the fundraising and sponsorships, plan meals and activities and oversee all the other pieces of this complex event.

De La Rosa wants the veterans to remember the weekend as special. Many of these men and women carry physical and emotional scars and my feel alone.

Standing on stage in front of several hundred people during the final evening event, De La Rosa addressed the guests, “I want each and every one of you veterans to know that I am and will be your Brother until the day I die. That’s why we Cast n’ Blast. So that you know that there is a community out there, and people who are willing to support you.”

De La Rosa’s mission doesn’t stop with Cast n’ Blast. Each Memorial Day he, Melissa and a team of supporters embark on a 22-mile road march. In 2017, nearly 50 people joined them in the Flag to Flag Ruck March, which honors the military men and women who paid the ultimate sacrifice for our country and raises awareness of the 22 veterans lost each day to suicide. De La Rosa and some of the group carried 22 lb. backpacks for the entire march. The journey began at a park in Riviera name after his uncle and ended at an American Legion hall in Kingsville.

“I organized these ruck marches because we want to restore the true meaning of Memorial Day,” said De La Rosa. “It’s not about mattress sales, car shows and cookouts. We can do this ruck march and endure a little bit of pain for them. We walk because they cannot.”

Most would consider these admirable efforts nearly unachievable, but De La Rosa does not restrict himself to a few weekends on the calendar. His sense of duty is ever present. He always keeps an American flag in his truck, should he come across a Gold Star family. De La Rosa goes out of his way to present it to them, usually accompanied with an emotional and understanding hug. 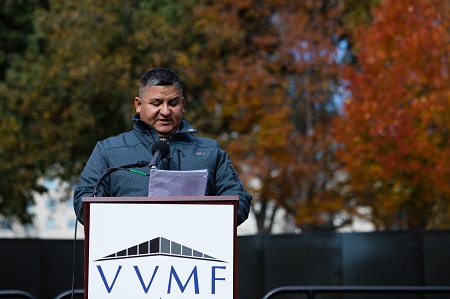 This past November a fellow IAM member made sure that De La Rosa was on the receiving end of a special weekend. IAM Communications Representative and U.S. Army veteran Andrew Hounshell learned about Gume’s selfless activities from a member of his local lodge.

Hounshell learned that individuals were being invited to read names of those who died in the Vietnam War for the 35th anniversary of the memorial. Knowing what it would mean for De La Rosa to take part in the ritual, he encouraged Gume to request to be a reader. Together, they worked to find a way Gume could get to Washington, DC to read the names.

“Melissa and I had never been to Washington and I had always imagined what it would be like if I could see the wall,” said De La Rosa. “I’m so glad she was there with me. I only wish my dad could have joined us, too.”

As the De La Rosas approached the Vietnam Veterans Memorial, they saw the first name and proceeded to walk down the crowded path. The farther he and his wife walked, the number increased to fill the wall with tens of thousands lived lost.

“It was not what I expected it would be like,” said De La Rosa. “The reflection off the wall really struck me. Then we found my uncle’s name.” 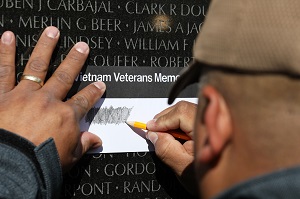 As he traced the name Gumesindo De La Rosa onto a piece of paper provided by a veteran docent his emotions could not be hidden from the reflection looking back at him.

His scheduled time to read approached, so he took his place in line with other readers. De La Rosa quietly waited until a local television reporter requested an interview following his turn. He was totally surprised by the attention but agreed. The interview ran that evening and has subsequently been seen by friends and family across Texas.

On November 10, 2017, Gumecindo De La Rosa respectfully read 26 names of the nearly 58,000 fallen America heroes. The last name he read was his uncle Gumesindo, who died November 12, 48 years earlier. “It was so weird how this all happened. It was nothing like I expected,” said De La Rosa.

It seems each day De La Rosa finds a new veteran Brother or Sister. That day in November he met dozens and showed honor and respect to thousands no longer here.

“Standing at the wall and looking back at all those names, “reflected De La Rosa, “to me that is the price of freedom.”

The Machinists Union is proud to have thousands of U.S. Militaqry Veterans as members. They work in every IAM territory, factories, offices, airports and military installations across the country. Visit goIAM.org to learn about IAM Veterans Services and resources available.