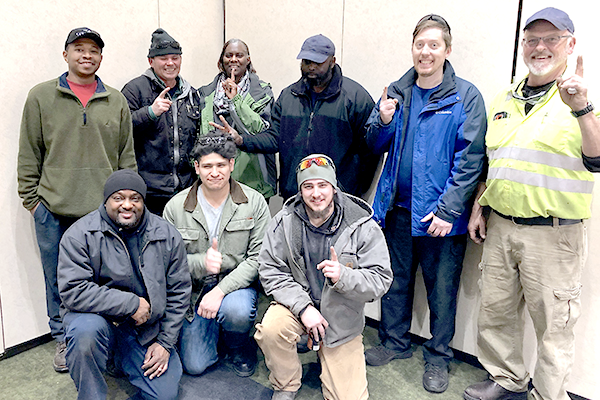 The Southern Territory is proud to announce we have some new members to add to our union family. We welcome nearly 140 dedicated men and women who work for the Installation Maintenance Division at the Fort Campbell U.S. Army Base in Kentucky.

“I am thrilled that these hard-working Americans made a choice to be part of the IAMAW. Our expertise in negotiating contracts at military bases across the United States is unparalleled in the labor movement and I look forward to being able to help this group negotiate a strong machinist contract that benefits both their work life and the lives of their families,” said Southern Territory General Vice President Rickey Wallace. “Their choice to ‘Vote IAM’ is one that allows these working class heroes, who make sure our Army soldiers have what they need to succeed, a voice on the job and a better future for years to come.”

For these mechanics who take care of both the military vehicles and the grounds equipment used at Fort Campbell, there was not a doubt they wanted to be part of the IAMAW. It was the other contracts the machinists union have at this base that led this group to our door. They knew our name and they understood what we could offer.

“They were fired up and ready to go. They wanted to get an election as soon as possible and they worked hard to make that happen,” said Mike Lee, District 711 Assistant Directing Business Representative and lead organizer of this group. “They even made sure to bring others to the meetings for the simple fact that they knew they could do better with a collective bargaining agreement.”

Lee says all the credit goes to the workers on the ground who worked hard to be part of the IAM. But District 711 Directing Business Representative Jerry Benson says Lee played a huge part in this home run.

“This is a good strong, union group who I am proud to say is now part of my union family. But it was Mike who led the way,” said Benson. “To be able to do this so quickly and so assuredly is a gift because it means we can get these IAM members what they need and want, and that’s a good, machinist contract.”