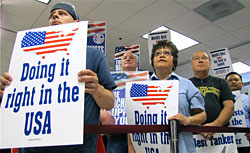 Despite the lack of a U.S. partner and still reeling from a recent rebuke over illegal subsidies by the World Trade Organization (WTO), the European aerospace consortium EADS submitted a bid to replace the U.S. Air Force’s fleet of air refueling tankers. The EADS bid comes within hours of a bid by the Boeing Company for the same contract.

Elected officials joined with business and labor officials for a rally in Everett, WA, to show their support for the Boeing bid and to ensure the air-to-air refueling tanker remains “Made in America.” Members of Washington’s congressional delegation say Boeing won’t have a level playing field unless the Pentagon factors the WTO ruling on illegal government subsidies into its bid evaluations.

“The WTO has ruled that Airbus has used illegal government subsidies for more than 40 years to become the world’s largest maker of commercial jets – and it does so as Airbus continues to use those subsidies to roll out new planes,” said U.S. Sen. Patty Murray, following the WTO ruling. “For too long, workers in Washington state have had to fight an uphill battle. Instead of competing just with Airbus, they’ve been forced to compete with the deep pockets of European governments that supply Airbus with illegal launch aid.”

In a letter to U.S. Defense Secretary Robert Gates, Washington Democratic Rep. Jay Inslee called on the Pentagon to quickly take steps to neutralize any unfair competitive advantage, “in order that the tanker competition can proceed and a contract can be awarded without delays.”

A decision on the multi-billion dollar defense contract is expected by November 12.