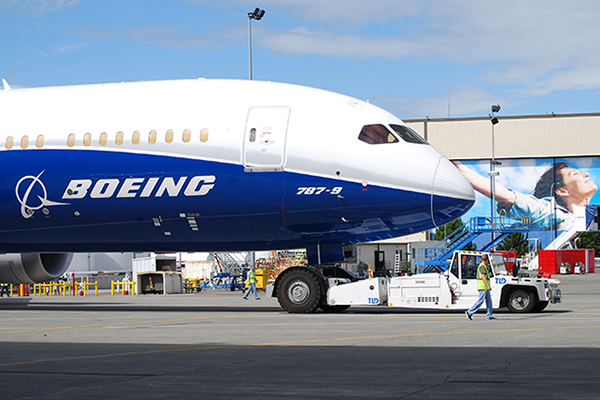 Boeing executives are gushing over the company’s stock, up a whopping 58 percent over the last 12 months. Washington state’s homegrown aerospace giant left the Paris Air Show with 571 orders worth $75 billion. Its chief competitor, Airbus, had 336.

A fourth of Boeing’s air-show orders were for the 737 MAX 10, built by Boeing Machinists right here in the Puget Sound region. After a successful launch in Paris, Boeing’s top marketing officer said the newest 737 derivative was “clearly the star of the show.” Boeing already has more than 300 orders for the 777X, still three years from rolling off the production line.

The company is enjoying simultaneously robust outlooks in both commercial and defense. That’s what makes Boeing’s recent job cuts, its deepest in more than a decade, even more upsetting.

My op-ed in the @SeattleTimes today should be a wake-up call to @Boeing executives shipping our jobs overseas #1u https://t.co/y4g0KsQxqY

When a company is thriving, it’s often taken for granted that the employees who make it possible are sharing in the success. That’s the way it used to be for generations of Boeing Machinist families. It made for a good living for hundreds of thousands of people, who spent their hard-earned dollars in the Seattle area.

The success-sharing model also made Boeing the most innovative and productive aerospace company the world has ever seen. Its dedicated and skilled workforce, who for a century have tackled every challenge in front of them, continue to make the industry’s most advanced — and profitable — aircraft. This year, Boeing reported a second-quarter net profit of $1.8 billion.

But at a time when many North American companies are bringing work home, Boeing is doing the opposite. Thus far in 2017, the company has shed more than 6,000 jobs, some 4 percent of its workforce, most of them in Washington State. Over the past four years, Boeing has reduced its Seattle-area workforce by more than 20,000.

Boeing’s pursuit of short-term profit for stockholders and executives is not only repulsive; it threatens the long-term viability of the entire North American aerospace industry. The Machinists Union has been sounding the alarm about this for decades. State lawmakers in Olympia should take the advice of more than 30,000 Machinists Union District 751 members who for years have advocated for common sense legislation tying the company’s eligibility for taxpayer dollars to the number of people the company employs in Washington State. Working families in the Puget Sound need this protection now.

Boeing will soon open a 737 finishing center in China, and a Boeing titanium plant will begin operations in Russia next summer. Many of the parts and components for the 737 and 787 are already produced overseas, including wings for the 787.

When our work leaves, so does our research and development superiority. China’s first modern large jet, the C919, made by the state-owned aerospace manufacturer Comac, celebrated its maiden flight this year. It’s a matter of when, not if, China begins challenging Boeing for jet orders. If Boeing thinks Europe gives Airbus an unfair advantage now, just wait until the Chinese government puts its full attention toward making itself the world’s leading aerospace manufacturer.

Boeing helped create the global competition the company most often blames for layoffs. Its executives in Chicago seem to have forgotten that their most powerful competitive advantage always has been — and continues to be — its workforce here at home. The skill, knowledge and ideas of Boeing Machinists are critical in an industry that demands constant innovation, now more than ever.

.@Boeing forgot its biggest competitive advantage–its workforce at home. Via @IAMBobMartinez in @SeattleTimes. #1u https://t.co/EPY98qSHZm

Foreign competitors took note of our success, and now they’re doubling down on recruiting and training the next generation of aerospace workers to challenge Boeing’s dominance. They’ve seen how aerospace manufacturing brings investment on a larger scale than almost any other industry. It means good jobs, stronger communities and a better life for working people.

If North American manufacturing is to make a comeback, we must preserve and grow skilled, good-paying aerospace jobs. We can start by demanding that Boeing, which will receive $8.7 billion from Washington state taxpayers over 25 years, bring our jobs home.

Robert Martinez Jr., a former aircraft assembler, is International President of the International Association of Machinists and Aerospace Workers. The Machinists Union represents more than 30,000 Boeing employees in the Puget Sound.