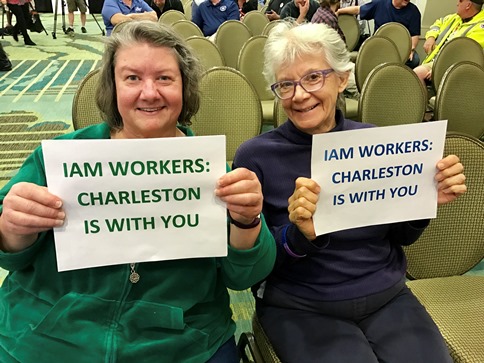 Hourly production workers at Boeing’s South Carolina operations have voted not to join the International Association of Machinists & Aerospace Workers (IAM) at the present time.

“We’re disappointed the workers at Boeing South Carolina will not yet have the opportunity to see all the benefits that come with union representation,” said IAM lead organizer Mike Evans. “But more than anything, we are disheartened they will have to continue to work under a system that suppresses wages, fosters inconsistency and awards only a chosen few.”

“Boeing management spent a lot of money to make sure power and profits remained concentrated at the very top. The company’s anti-union conduct reached new lows,” said Evans. “The IAM remains committed to getting Boeing South Carolina workers the respect, wages and consistency they deserve.”

The election was conducted by the National Labor Relations Board (NLRB). Under NLRB rules, workers must wait one year before having another vote for union representation. The IAM plans on remaining in close contact with union supporters at Boeing and members of the Charleston community to figure out the best path moving forward.

“Ultimately it will be the workers who dictate what happens next,” said Evans. “We’ve been fortunate enough to talk with hundreds of Boeing workers over the past few years. Nearly every one of them, whether they support the union or not, have improvements they want to see at Boeing. Frankly, they deserve better.”