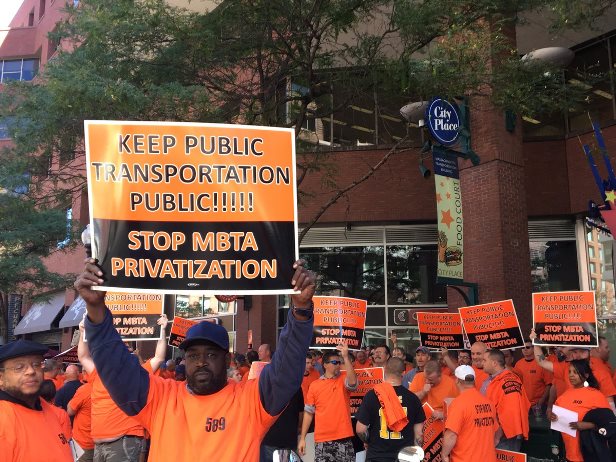 IAM Local 264 Bus Mechanics who keep thousands of Boston’s “T Buses” in working order are protesting a proposal from Massachusetts Republican Gov. Charlie Baker to privatize the work. The move would force cuts to pay and benefits, say union members.

They say the privatization will lead to a decline in service and unfairly punish workers for a lack of investment in the system that spans back decades.

“I’m unclear about why the potential privatization of bus maintenance has apparently become front-burner when I think there are many steps down that road that must be taken first,” Local 264 Business Representative Craig Hughes told the board, according to the Boston Globe.

“No one understands the transportation industry, and what it takes to keep it moving like the dedicated professionals servicing them,” said District 15 Directing Business Representative Juan Negron. “The highly skilled IAM mechanics bring a level of professionalism and experience the state won’t receive from privatization.”

“A year ago this governor appointed an IAM Representative to the Massachusetts DOT Board of Directors with the intent of bringing a diverse, well-rounded skillset to the table,” said Eastern Territory General Vice President Jimmy Conigliaro, Sr. “His commitment was to tap into the vast experience of the IAM for recommendations for improvement to the system. To say we are displeased that the governor is ignoring this advice is an understatement.”