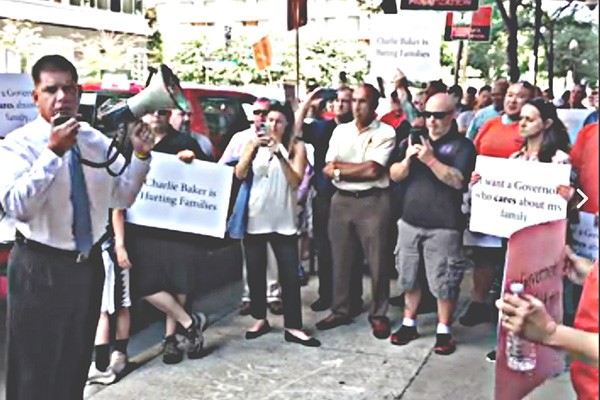 This was the kind of surprise that IAM Local 264 MBTA Bus Mechanics, fighting for their livelihoods as Massachusetts Gov. Charlie Baker pushes to privatize their jobs, were glad to see.

Before a meeting of the Boston-area transit agency’s fiscal board on Monday, Mayor Marty Walsh pulled over his car to join a rally of MBTA mechanics and their families. He wielded a bullhorn while delivering an inspiring speech in support of the nation’s No. 1 bus maintenance workforce.

Walsh blasted the governor’s outsourcing plans, saying the ploy would “make the middle class go down.”

“Mayor Walsh understands that privatization is nothing more than a scheme to slash the wage and benefits of these working families,” said IAM Eastern Territory General Vice President Jimmy Conigliaro, Sr. “Like our members, he knows this attack is designed to steal their pensions and eviscerate the security their union contract provides. Our members won’t back down in this fight for their future.”

The mayor’s surprise visit comes two weeks after Massachusetts Congressman Joe Kennedy stood with the more than 400 T Bus Mechanics and their families at a bus maintenance garage in Quincy, MA. During that event, the Invest Now coalition vowed to begin a campaign to protect the mechanics, their families, riders, and taxpayers from the latest Baker bus privatization scheme.

Later that week, Baker and MBTA board member Brian Shortsleeve, the agency’s former general manager, barreled ahead with the bus maintenance “request for proposal,” despite explicit instructions from the board to negotiate with workers in good faith. Baker had previously promised to not outsource core MBTA services.

Speaking in front of the MBTA board Monday, IAM District 15 Business Representative Mike Vartabedian, a former MBTA mechanic, asked the fiscal control board to take control over negotiations.

“Brian Shortsleeve continues to undervalue our proposals so he can move ahead with his ultimate plan which is to privatize the MBTA,” said Vartabedian. “If this administration really cared about the workers and their families, Brian Shortsleeve would have accepted the $29 million in savings that we have offered or would have at least put a counter proposal on the table.”

Local 264 Bus Mechanics, some of whom already work two jobs to support their families, voluntarily deferred a 2.5 percent raise scheduled for July 1. They have also offered to accept the same future general wage schedule that the MBTA has already agreed to with the Carmen’s Union.

The concessions are being offered despite the fact that Local 264 Mechanics boast a nationwide-best 12,946 miles between breakdowns, compared to 5,696 miles in New York and 3,008 miles in Chicago.

The governor’s privatization push not only doesn’t make sense for riders or workers; it has had a deeply personal impact on Dana A. Morrison, a Local 264 Bus Mechanic who suffered a traumatic brain injury while serving in Iraq.

Morrison is still waiting for a response to this letter he wrote to Baker and Shortsleeve: