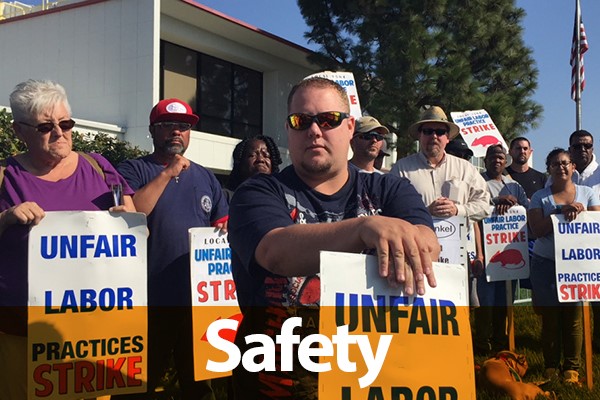 IAM Members of Bay Point, CA Local 1584 at Henkel Aerospace are back to work having secured significant victories after a two and a half month strike.

Following an industrial accident in 2013 that took the life of a coworker, the workers organized and won their first contract in 2014. After a difficult three years, the members banded together to demand improvements in the area of health and safety during their second contract negotiations.

“I am extremely proud of the solidarity displayed by these Machinists,” said District 190 Business Representative Steve Older. “They walked off the job as members and returned to work as activists.”

The provisions of the new agreement include the establishment of a joint labor management safety committee, regularly scheduled safety meetings with the first six safety meetings to be conducted by a federal mediator and safety meeting minutes must be taken and submitted to the union.

The Union also successfully demanded the removal of all employees who were hired as strikebreakers prior to IAM members returning to work.

“I am pleased that this strike was such a success for our members,” said District 190 Directing Business Representative James Beno. “The outpouring of support from the labor community as a whole was overwhelming.”

“These men and women should stand tall for the work they did to push back against a corporation that treats workers as a disposable commodity,” said Western Territory General Vice President Gary Allen proudly commented. “Their efforts embody what it means to be a Fighting Machinist.”

The new agreement also contains 3 percent wage increases, a $750 signing bonus and back pay for the three holidays that occurred while the members were on strike.