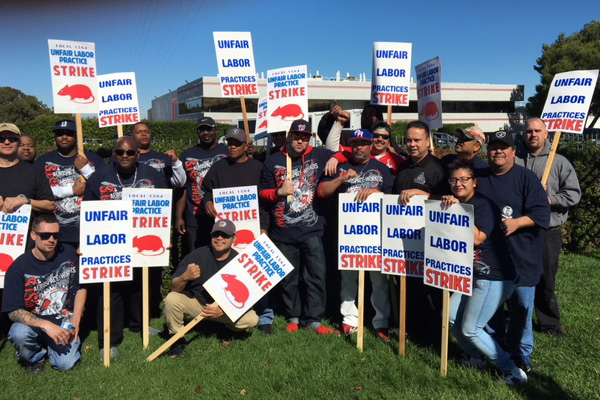 More than 80 IAM production workers at Henkel Aerospace Bay Point in Pittsburgh, CA and more than 40 workers at Solvay Industries in Santa Fe Springs, CA have taken to the strike lines as the two employers refuse to address worker safety and shop floor concerns.

In Pittsburgh, workers joined East San Francisco Bay Local 1584 after a military veteran temporary employee was pulled to his death while working a chemical mixing machine. They’ve since negotiated a first contract but it been marked by safety issues continuing to be ignored by Henkel, resulting in a list of OSHA violations that the company is challenging to this day. Within the past 6 months, several severe live steam burns have occurred, due lack of scheduled maintenance recommended by the current safety committees. One injury caused third degree burns over 30 percent of an IAM Brother’s body.

“Human loss and suffering are immeasurable,” said IAM Western Territory General Vice President Gary Allen. “Our Brothers and Sisters have chosen to strike for the virtuous cause of enhanced safety standards. We value their sacrifice for one another. They are defining who we are and what we stand for as a union.”

The Machinists have filed numerous Unfair Labor Practices (ULP) claims and Cal-OSHA has cited and penalized the company. The current ULP’s are for violating grievance timelines, violation of status quo by mandating a five 12-hour day schedule and by training nonunion employees to perform IAM work while the union was still in negotiations. Several other ULP’s are to be filed later this week.

In Southern California, IAM members decided they had enough after waiting nearly 18 months for Solvay Industries to respect them and their union. After joining the IAM in early 2016 and beginning negotiations in August of that year, the workers have faced continuous disrespect and insults at the bargaining table. In December 2016 the company walked away from the bargaining table.

Since then, many requests for information and ULP charges have been filed by the IAM with the NLRB. With management’s refusal to return to the bargaining table, the members voted overwhelmingly to go out on a ULP strike. The group stayed out four days and their action forced the company to return to the negotiations in April, but progress has been difficult.

“The strength of these members is impressive,” said Allen. “They have fought hard to get into the IAM and are not going to let this company disrespect them. We will be standing with them until they get the justice they have earned.”