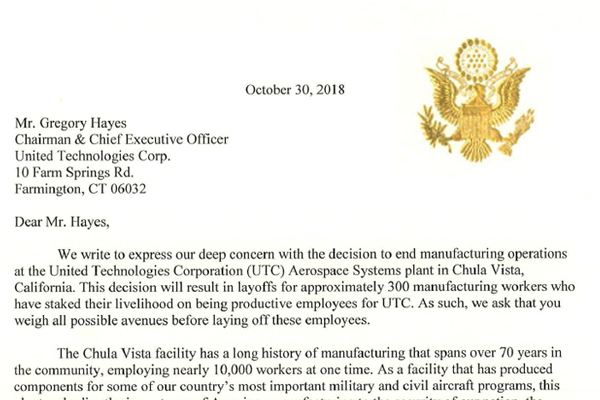 In July, UTC notified IAM members of the planned layoffs. The company plans to end manufacturing at the plant, which has been building planes since 1940, by 2020. UTC has systematically moved work to low-wage plants in Mexico over the last several years.

“The Chula Vista facility has a long history of manufacturing that spans over 70 years in the community, employing nearly 10,000 workers at one time,” Feinstein and Harris wrote to UTC Chairman and CEO Gregory Hayes. “As a facility that has produced components for some of our country’s most important military and civil aircraft programs, this plant embodies the importance of American manufacturing to the security of our nation, the economy of California, and the workers and their families in Chula Vista. By ending production at the facility, UTC would lose a highly-skilled, hardworking, and dedicated group of employees who take great pride in their work.”

“We hope UTC reconsiders its decision to shut down its manufacturing facility in Chula Vista,” said IAM International President Robert Martinez Jr. “Generations of IAM members have made this facility successful. The work being done at UTC’s facility in Mexico is work that should be done in Chula Vista. We applaud Sens. Feinstein and Harris for standing up for good jobs here at home. The IAM is putting forth every resource to defend our membership. UTC is turning its back on the Chula Vista community and working families. We will not stand by while this company and this administration continue to allow our work to be shipped to Mexico.”

“I’m pleased that Sens. Feinstein and Harris had the courage to stand by our side in requesting that UTC work with the IAM and the local community to come up with solutions to maintain production in Chula Vista,” said IAM Western Territory General Vice President Gary Allen.