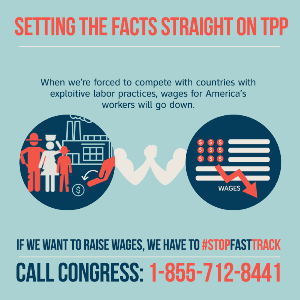 The time to stop Fast Track is now or never.

This terrible trade negotiation policy recently passed in the Senate. And now that Congress is back from vacation, they’re expected to bring Fast Track to a vote any day now. Some of our lawmakers are pretty gung-ho on scratching the backs of their wealthy campaign donors by supporting Fast Track. But many of our elected officials can still be moved–especially if we remind them that we vote.

Today, people all over the country are making calls to their lawmakers to let them know that working folks absolutely cannot afford another bad trade deal.

We need to let them know we’ve got the facts and we don’t support Fast Track. In the past, deals that were passed using the Fast Track process deepened our trade deficit, weakened our manufacturing sector, pushed wages down and increased the 1 percent’s control on our economy. More of these bad policies will shrink our paychecks and stifle middle class growth.

Not only does Fast Track encourage the passage of bad trade deals, but it will also tie the hands of Congress and prevent them from improving bad deals or telling the negotiators the deal won’t get a vote unless they go back to the drawing board. We deserve better than a policy that limits Congress to a simple up or down vote on trade deals that will affect working families everywhere.

I believe that we can win this, but we have to act now.

Call your US Representative and tell them to stand up for workers and democracy by opposing Fast Track. Call 1-855-712-8441.